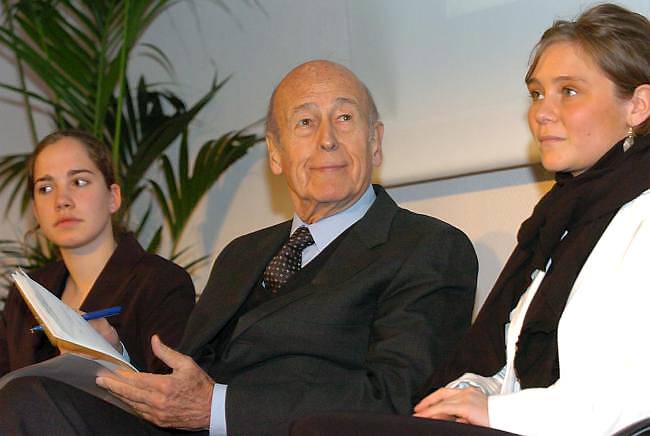 Ten years ago, in mid-April 2005, Valéry Giscard d’Estaing came to Angers in order to exchange with ESSCA students. Just six weeks before the French referendum on the constitutional treaty his visit was part of a campaign for an increasingly uncertain ‘yes’ vote. Given his role in chairing – with diplomatic skills and political know-how – the European Convention between March 2002 and June 2003, his defense of the treaty was more than legitimate and the amphitheatre was crowded.

The former president of the Republic was visible delighted to find himself with a handful of young students who, in turn, were visibly very impressed with the charism of the 79-years-old elder statesman. After a bit of coquetry on his age, he staunchly defended his text,hiding his disappointment with the manner in which the substance of the original treaty had been watered down by the European Councils in 2003 and 2004. Rather helplessly, he had witnessed how the ‘big’ member-states wanted to modify the voting rights, how the ‘small’ member-states were all up in arms about ‘their’ commissioner, how the catholic member-states insisted on a reference to the Christian heritage of Europe, and how Poland, Spain and the UK went each on a major ego-trip. All that remained of the rather audacious ‘Constitution’ of the summer of 2003 was a much diluted and quite indigestible treaty, unreadable for every citizen who did not have the good luck to have doctorate in international law.

These weaknesses notwithstanding, Giscard d’Estaing played the true believer and defended the virtues of his ‘child’, as he called it, with conviction. He even went so far as to find this pseudo-constitution ‘as perfect as the French constitution’. A comparison, which in retrospect sounds like a Freudian slip of the tongue, given that both texts are at the origin of numerous and lasting deadlocks in France and Europe.

Moreover, this attitude of assimilating any criticism of the treaty, however well-founded and differentiated it may have been, to the old anti-European reflexes of the political extremes, could only be perceived, in the already tense atmosphere of the referendum campaign, as yet another evidence of élitist condescension. And, thus, contribute to strengthen the ‘no’ camp.

Needless to say, Giscard had no trouble convincing ESSCA’s students of the merits of both the constitutional treaty and European integration in general. Smart, young, multilingual individuals, with high-level academic training and an international mindset, are part of those Europeans for whom Europe (just like globalisation) does not stand for economic threat and identity angst, but for professional opportunity and cultural diversity.

On the same day, Jacques Chirac, French president for ten years already, convened a panel of 83 young citizens between 18 and 30 years old to the Elysée Palace in order to debate on Europe. It was a disaster. Far from preaching to an already convinced audience, the president had to resort to papal phrases like ‘Don’t be afraid!’. The sentence that more than any other gave evidence to his flagrant inability to understand the prevailing scepticism was his avowal of total lack of understanding of the young people’s ‘pessimism’ with regard to France and Europe: ‘Je ne le comprends pas!’, he sighed, incredulously and helplessly messing up a communication exercise that had seemed so simple and had turned so sour.

Could there have been a better illustration of the socio-economic and generational rift between the French élites and the people they were supposed to represent? Six weeks later, the constitutional treaty was voted into the dustbin of history with almost 55% of the votes.

This is the first of two blogposts on Valéry Giscard d’Estaing.