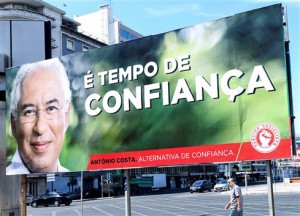 (Im)possible – this was the adjective I used to describe the probability of a union of the left after the Portuguese parliamentary elections. The brackets were supposed to mean ‘not excluded in theory, but far from likely to happen in practice’.

Never in the history of Portuguese democracy since 1974 had it been possible to bring together the left wing forces represented in the parliament in order to back a constitutional government.

Never a party who had not won the elections had been able to govern instead of the most voted party.

And never the Communist party (PCP) had shown itself able to cooperate constructively in parliament.

But this time all of this happened, to the astonishment and the dislike of many.

Initially the President of the Republic chose the leader of the centre-right coalition (CDS-PSD), Passos Coelho, as Prime-Minister after the 4 October elections. His government’s programme did, however, not manage to pass through parliament, where all the other (left-wing) parties agreed on leaving the government isolated.

Then there was a long wait, while the President was searching for a possible solution. Not an easy task for him, since his powers were considerably diminished by the circumstance that the presidential election will be held next January already, which, according to the Constitution, does not allow him to use his power of dissolving the parliament and calling for new elections.

After much hesitation, the President finally appointed António Costa, the leader of the socialist party, which had come second in the elections, Prime Minister on 26 November. Costa had indeed managed to negotiate a parliamentary agreement with the BE (radical left), as well as the PCP and the Verdes. This was possible only by leaving behind all disagreements on major current issues like the EU and monetary union, but also on ideological or geopolitical controversies like NATO membership (which is firmly preserved in the government’s programme), and agreeing instead on a minimum common denominator: an anti-austerity programme with several social and redistributive policy measures. Although very reluctant – to the point of making an acid investiture speech – the President of the Republic finally had to recognise this solution as viable.

This is a major change in Portuguese political history: it represents the break-up of the so-called ‘governmental arc’, which ever since 1976 had only allowed three pro-European parties (CDS, PSD and PS) to govern the country.

Furthermore, it required an unprecedented ice-breaking between the PS and the PCP. The credits seem to be given to Costa (which gives evidence to how important individual personalities are in politics). He holds a track record as a clever and persistent negotiator, not least for former agreements on the left when he was President of the Lisbon City Council. He also has family connections with the PCP, his deceased father having been a lifetime member of the PCP.

All these circumstances have made the (im)possible happen. The new government (with a strong emphasis on social inclusion) is about to start its mandate, and the European Council should be prepared to welcome a tough negotiator, whose performance will be carefully watched from all sides.

Cláudia Toriz Ramos is professor of political science
at the Universidade Fernando Pessoa in Porto.