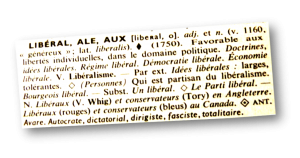 For as long as I have lived in this country – a quarter century, after all – the surest way for French politicians to put an end to their political career was to make a statement, however prudent, in favour of ‘liberalism’. Once labelled a ‘liberal’, you could be sure to be turned in no time into a ‘neo-liberal’ before being commonly and irremediably demonised as ‘ultra-liberal’ (whatever that means). Naming a party ‘lib-dem’ was either political satire or political suicide. Alain Madelin tried in 1998, but gave up in 2002 after having earned exactly 3.91% of the vote in the presidential election.

The primaries, however, seem to have changed things. With the right and centre virtually monopolising the political debate for several weeks, ‘liberalism’ is undergoing an unexpected semantic rehabilitation. The final TV debate between François Fillon and Alain Juppé on Thursday night – followed by an incredible 8.5 million audience – featured two candidates who advocated reforms for which the adjective ‘liberal’ appears perfectly appropriate. And they’re not alone!

For the 2017 season, the liberalism fashion will actually come in three trends. There’s the daring yet sober design of Fillon’s self-proclaimed ‘radical’ costume, not without a certain reactionary chic. Then there’s the admittedly ‘less brutal’ Juppé outfit, which seems a little bit easier to wear and tries not to break too abruptly with traditional attire. And finally there is the stylish and trendy apparel designed by Emmanuel Macron, rather tasteful actually, but will it stand the test of the spring fashion shows?

‘Liberal’ is one of these key words that have a different meaning in different languages, shaped and draped with connotations by the local political culture. In a wonderful sketch by German humourist Loriot (yes, seriously: German humour!), a liberal-democrat politician keeps repeating in a TV debate that ‘in the liberal sense, liberal not only means liberal’. In the French Fifth Republic ‘liberal’ is traditionally perceived as a shortcut to ‘promotor of cynical laisser-faire capitalism’ and ‘strictly conservative in societal matters’ (not exactly what Fox News or breitbart.com would spontaneously associate).

Fillon, who obtained 2 903 564 votes on Sunday, fits this classical description remarkably well. What is new is that he is no longer ashamed of it. The reason is probably that he has felt that the discourse of the ugly, but simple and necessary truth is being received differently than ten or twenty years ago. Especially the electorate of Catholic obedience and heritage proves very sensitive to his logic of redemption: confession of decades of sinning is followed by punitive repentance and compensated with eternal salvation at the end of the tunnel.

Macron begs to differ. He regularly points out that ‘liberalism is a value of the left’. This would find the applause of the so-called ‘social democrats’, as embodied by former trade unionist, renowned editorialist and historian of the French left Jacques Julliard, who wrote after the 2005 referendum on the constitutional treaty that it was ‘extravagant that the socialist left has heaped opprobrium onto a doctrine that presided over its birth until the mid-19th century and has since then allowed Socialism to distinguish itself from its totalitarian twin’ (Le malheur français, Flammarion, 2005, p. 124). Liberalism was the French left’s ‘take-away’ from the Revolution, from Benjamin Constant to Alexis de Tocqueville (and no, I am not confusing ‘libérté’ et ‘libéralisme’).

For Macron, a true liberal is a politician who ‘attacks privilege and economic deadlock, while working for social mobility rather than favouring those who are already successful!’ According to him, the French confuse ‘liberal’ with ‘conservative’, simply ‘because we do not have a liberal tradition’, as he just recently explained again in an interview with Le Monde.

And there’s the rub. Since Mitterrand’s famous ‘turn to austerity’ in 1983, liberalism has always been equated with humiliating external disciplining, mostly imposed by Brussels and Bonn/Berlin, undermining the Welfare State and public services. Macron is already categorised as a ‘social-liberal’, which – you may have guessed – is a label bestowed only by the guardians of the true doctrine of the French left and comes very close to ‘evil’. 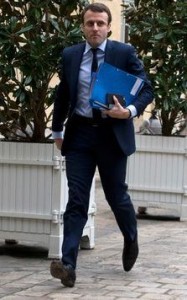 In other words: the stage given to liberalist ideas by the fashion show of the right and the centre may be a very temporary one. Soon other fashion houses will stage their own parades and impose a different lexicon. Macron’s new garment of liberal economics and progressive social ideas does not correspond to traditional French taste. It is truly ‘disruptive’ (to quote one of his own favourite adjectives).

The renaissance and rehabilitation of the word ‘libéral’ is a remarkable feature of this early campaign phase. Whether it will be followed by a redefinition is another question.