Six weeks ago Brice Teinturier, whose face is well-known to the French from numerous election evenings on public television as the polling pundit who explains the gains and losses of the different parties, tried to introduce a new acronym named ‘PRAF’. In a book based on many previously published IPSOS polls and coming dangerously close to a self-promotion exercise timely published in the middle of the election campaign, he identified ‘the real crisis of democracy’, i.e. the triangle of disappointment, disillusion and disgust, which, he believes, leads to a new kind of ‘counter-cynicism’ with regard to politics in general. ‘PRAF’ thus stands for ‘Plus rien à foutre’, which may be translated alternatively by ‘couldn’t care less’ or various colloquial expressions starting with ‘F’. 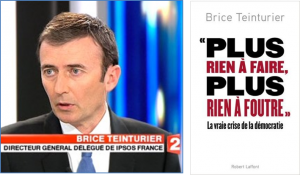 To put it mildly: apart from the original neologism ‘les Prafistes’, which was eagerly picked up by excited news channels and just as quickly dropped again after a few days, there is nothing new in Teinturier’s book. Everyone following French politics over the last two decades would easily have summed it up in a short paragraph or two.

Yes, voter turnout is overall in decline (even in the presidential election abstention could reach a record 30% this year), and yes, the presidential system of the Fifth Republic, with its vicious circle of raising excessive hopes of change only to drown them in the deep frustration of inevitable Realpolitik and reform deadlock, has lost a lot of its credibility. For many voters the two last presidencies have been the final nails in the coffin. But it’s not as if the ‘Prafistes’ are a recent phenomenon. Since Mitterrand’s austerity turn of 1983 smashed the high expectations of change in budgetary rigour, their contingent has grown steadily. And we know very well their behaviour pattern: either they don’t bother to vote anymore, or they go for the Front National (‘the only one we have not tried yet’, as they say, shrugging countless shoulders on countless market squares in countless news reports on television and radio).

It is true that this time around they seem to have more impact. In a fragmented political landscape, voter mobilisation – or the absence of it – will be key in the second round. Last week, the Sciences Po researcher Serge Galam received wide media attention with his prediction, grounded on perfectly credible data modelling, that ‘the chance of a Le Pen victory is much higher than the polls indicate’.

Even without sophisticated figure crunching it is easy to foretell that people don’t go to vote if they consider that it does not matter who wins. And it is not very hard either to identify the ‘Prafistes’ simply as the French version of Trump’s Rust-Belt white male working-class electorate or Northern England’s xenophobic Brexiteers: globalisation losers, in short. It’s much more difficult, however, to underpin such clichés with serious academic evidence. 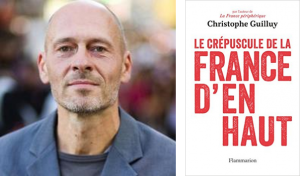 The most compelling theorist of the French disappointment-disillusion-disgust spiral is a geographer, Christophe Guilluy. After introducing what he very aptly named ‘Peripheral France’ in a much-discussed essay in 2014 (‘La France périphérique’, Flammarion), he published a sequel in 2016 much less aptly titled ‘The Twilight of Upper France’ (‘Le crepuscule de la France d’en haut’, an expression which the Guardian recently simply translated as ‘The Twilight of the Elites’).

As the title reveals, this is a very angry book, but unfortunately also a poorly written one, despite all the pertinent evidence that underpins its arguments. Quickly drafted, bloated to book size by large print, unstripped of its redundancies, and smelling of personal vendetta against the critics of his ‘periphery’ concept of 2014.

Quite a pity, since the author reminds us very convincingly that in a large territory like the Hexagone social geography matters. In a country where the State (above all, the Third Republic) had always promised to provide equal access for all citizens to everything its generous hands had to offer – education, health services, transport, and all other public services – the successive governments of the Fifth Republic, operating under different budgetary circumstances than their predecessors, can only be perceived as traitors to what the whole idea of Republican equality was about.

One of Guilluys’s key concepts is ‘metropolisation’, the ‘capturing’ of jobs, wealth, culture, growth potential, public services and training opportunity by the fifteen biggest French conurbations – most of them trendy and attractive cities with a high quality of life. This concentration process has led to a self-proclaimed, but utterly fake ‘open society’, in which increasingly visible, but permanently denied, ‘hard borders’ are consolidated between the socio-economic groups who have access to the level playing field of the economy, and those who are offside (p. 22-25).

Each of these urban centres has become a little Paris in its own right, where everything is organised in a way that allows the already rich and educated to pursue a massive gentrification process and enjoy ‘all the advantages of the free-market economy without the inconvenient drawback of class struggle’ (p. 28). Behind a thick discursive veil of openness and fairness, multiculturalism and ecology, the socio-cultural segregation already diagnosed by Bourdieu (and reinforced not only by real estate prices but also by clever bending of schoolmapping rules) has reached a new level.

Furthermore, as Guilluy shows with a good deal of linguistic sensitivity, ‘metropolisation’ is at the same time underpinned by a smart rhetoric imposed by those who are in command of the media discourse. Thanks to the Front National and to the ethnicization of what are in fact socio-economic problems, any protester can easily be condemned as a racist little Frenchlander. Another very efficient trick performed by the rich and cultivated is the successful hijacking of the increasingly meaningless expression ‘the middle classes’… (p. 143)

‘Metropolisation’ comes at the expense of all the ‘disconnected territories’ of the Republic (p. 87), in other words: the rampant desertification of the ‘periphery’, a concept not to be mistaken for ‘suburban areas’ (‘zones péri-urbaines’), let alone the famous ‘banlieues’. The periphery of France are zones where the losers are huddled: rural areas that are progressively emptied of their public services, and all the small and medium-sized (formerly industrial) cities strewn across the entire country. The data are merciless: while ‘métropoles’ like Lyon, Toulouse, Nantes, Rennes, Bordeaux, Strasbourg or Montpellier continue to both grow and produce new jobs, cities between 50,000 and 100,000 inhabitants are stagnating, and those between 15,000 and 50,000 inhabitants are regressing. In the current order of things, this trend seems irreversible: ‘All hope abandon ye who enter here!’ It is not surprising that ‘abandoned’ is how these populations describe themselves whenever a Parisian journalist drops by.

At the eve of the 2017 elections this ‘periphery’, according to Christophe Guilluy, is home to 60% of the entire population. That’s quite a few potential non-voters. And a real reservoir for Marine Le Pen.

This is post # 16 on the French 2017 election marathon.
All previous posts can be found here