On 22 January 2023, France and Germany celebrate the 60th anniversary of the Elysée Treaty, rightly praised as a milestone in Europe’s post-war history. But the Treaty only institutionalised on governmental level a process towards reconciliation that civil society had already initiated without waiting for politics. This is the second post of a series of four personal musings about a remarkable achievement. 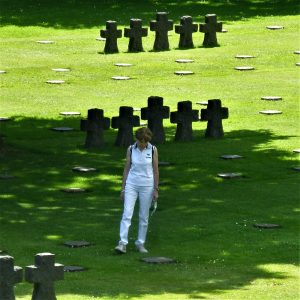 La Cambe is a small village on the coastline of Lower Normandy, with 546 inhabitants. Alive, that is. They cohabitate with over 21,000 German soldiers buried in the war cemetery that covers seven hectares of their land. They are part of the 155,000 killed between the landing of the Allied troops on 6 June 1944 and the end of the fighting in Normandy roughly three months later. The story of this place is an interesting case study that helps understanding why French-German reconciliation worked out the way it did.

When the department of Calvados extended the National Road 13 between Caen and Cherbourg in the mid-1990s to a four-lane highway, they needed to deviate it in some places. As a result, the war cemetery in La Cambe found itself separated from the main road by a 100-meter patch of land filled with a spoil heap from the road works.

The authorities offered these extra square metres to the Volksbund Deutsche Kriegsgräberfürsorge, a long-standing charity organisation tending war graves and identifying the buried all across the continent. The idea was floated to create a small information and documentation centre and a ‘Peace Garden’ made of trees sponsored by individuals or organisations, with the aim of both nicely landscaping the heap and generating revenues to be put to use in the cemeteries of Eastern Europe, which had all of a sudden become easily accessible at the beginning of the nineties.

Sponsorship for a tree was tentatively fixed at 500 D-Mark (250 Euros). Each tree would have a little green sign attached, with the date and name of the sponsor, and two lines of text. One of my second-year students from the business school in Le Havre was perfectly happy to do a summer internship on site carrying out a ‘market study’ : with her little questionnaire she simply tested the idea and the price range with the visitors. The echo was overwhelmingly positive, a lot of people wanted to be shortlisted right away. Consquently, the idea was implemented. 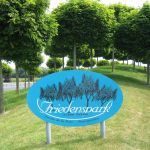 On 21 September 1996 the first 21 maple trees were planted during the inauguration of the peace garden. Space was available for a total of 235 trees. As of November, the garden was already completely overbooked, prompting the French authorities to grant the use of another heap hill at the new highway ramp, and while they were at it, they also offered a whole alley of trees along the small cul-de-sac road between the ramp and the cemetery. By early 1998, the garden was full with 1,127 trees. Today, the cemetery draws around 100,000 visitors each year, and since 2019 the exhibition in the small information centre has been remarkably well renewed and updated.

In the 21st century, the easygoing exchange between a German charity and French authorities does not come as a big surprise. What is more surprising is the calm toleration of all these enemy bodies in the French soil in the immediate aftermath of the war and during the post-war years. According to the archives, no incident of protest, let alone vandalism, has been noted, ever. Although there would have been some good reasons, since the cemetery not only contains the remains of kids aged 17 and 18, sent to the front in order to give their lives to the Führer, but also several hundreds of ‘Waffen-SS’ members, and a handful of truly evil war criminals, among whom the officer who had ordered the Oradour-sur-Glane massacre, an emblematic landmark of cruelty.

Obviously, the Volksbund made sure to keep a low profile, while brainstorming about how to deal with this necropolis, one of five in Normandy. In an internal memo of 1949, the future design of the cemetery was discussed. ‘Thousands of crosses’, as for instance in the well-known American graveyard in Saint Laurent/Colleville – the one made famous by Spielberg’s Saving Private Ryan – located 15 km to the east of La Cambe, were considered an ‘unsatisfactory solution’ with a ‘massifying’ effect and definitely to be avoided. The best option was esteemed to be groups of five symbolic crosses above the countless, but discreet flat stones in the ground bearing the names of the buried.

The creation of the Federal Republic allowed for intergovernmental talks on the issue of war cemeteries. A convention was signed by Chancellor Adenauer and Prime Minister Pierre Mendès France in 1954, jointly expressing the wish to make these cemeteries ‘permanent’ and ‘ensure the dignity of the graves’. The French authorities would support the civil society organisation designated by the German government. La Cambe, like many other sites, was handed over to the Volksbund.

As early as 1957 – six years before the Elysée Treaty was signed – it was thus possible to launch the redesign of the cemetery in carrying busloads of volunteers to the first International Youth Camp organised on site. The archives report that many local French kids dropped by for curiosity’s sake, then came back the next day with their own shovel and helped for a week or two. 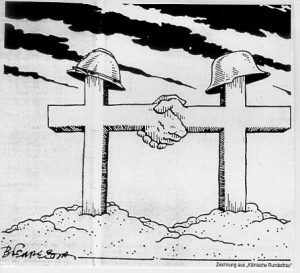 ‘Reconciliation over the graves.’

The risk of an emotional backlash against such a German monument could never be fully excluded, though. The minutes of an exchange between the Volksbund and the French Ministry of Veterans and War Victims prior to an official inauguration ceremony of the fully completed landscaped cemetery in 1961 shows how the latter insists on the purely religious, low-key character of the event in order to avoid any embarrassing incident. Which did not exclude a political bilateral ceremony within the halls of the Préfecture de Caen, including representatives of civil society from both sides. And it was insisted that the good understanding between the officials should by all means be underpinned by contacts between the visitors and the local population.

‘Reconciliation over the graves’ became the motto of the Volksbund and entered the mainstream vocabulary through countless speeches and editorials. When I discussed with the Volksbund officials during the work on the La Cambe peace garden in 1995-96 how to explain that a place like this had never been the object of negative attitudes, we came up with the ‘profoundly human and universal character’ of an activity that consists of caring for graves, the low profile of the German cemeteries far from any heroic discourse, and the unwavering positivity of the ‘peace narrative’.

But La Cambe is also a relevant case study for the conditions under which such a reconciliation is possible in the first place. It is enabled by an unambiguous recognition of wrongdoing on one side and a willingness to believe in its sincerity on the other side. It is facilitated by an overwhelming tiredness and a shared understanding that the ‘never again!’ principle needs concrete realisations to be meaningful. And it is greatly helped by the consistency between bottom-up field work and governmental orientation. There is a link between the Schuman Declaration and the acceptance of soldiers buried in Norman soil.

This being said, as one of my American students wrote in an essay after a day trip to the Normandy beaches, French-German reconciliation, even before the Elysée Treaty of 1963, ‘is nothing short of a miracle’. Needless to say, she got an excellent grade.