On 22 January 2023, France and Germany celebrate the 60th anniversary of the Elysée Treaty, rightly praised as a milestone in Europe’s post-war history. But the Treaty only institutionalised on governmental level a process towards reconciliation that civil society had already initiated without waiting for politics. This is the third post of a series of four personal musings about a remarkable achievement. 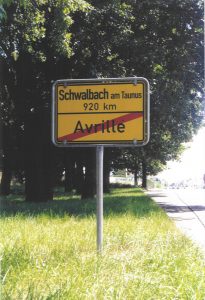 Is there a better illustration of the bottom-up dynamic of post-war French-German reconciliation than the story of the town twinnings?

As I write, 2317 French cities, towns and villages are twinned with a German municipality of similar size. That’s a total of 4634 places big and small with friends across the border. Unimaginable? Unbelievable? Mind-boggling? Feel free to choose your adjective.

Of course, not all of these ‘partnerships’ as they are called by the Germans are filled with the same intensity. In smaller municipalities, much depends on tireless individuals, as well as demography. And language skills, which have declined over recent decades in both countries outside the border regions. Still, the number of the twins has never decreased. It actually keeps growing, albeit, obviously, at a very moderate pace nowadays.

Once again, like we already observed in the two previous posts (here and here), civil society preceded or paved the way for political institutionalisation. At the same time civil society initiative was also facilitated and legitimised by major political acts like the Schuman Declaration or the Elysée Treaty.

Knowing that 130 French municipalities were already engaged in friendly exchange with German counterparts necessarily was a reassuring piece of intelligence for Charles de Gaulle, when he scheduled his first state visit to Germany in September 1962, following the solemn ceremony in Reims Cathedral with Chancellor Adenauer in July. The triumphant welcome he received in the German cities he visited revealed both the public’s gratitude for these symbolic acts and a longing for further bilateral steps of reconciliation, in addition to and beyond the economic cooperation embodied in the Treaties of Rome.

Before taking off in France, the post-war twinnings were an English idea at first. As early as 1947, Bonn and Oxford, Düsseldorf and Reading, Hanover and Bristol engaged in official contacts.

The French were in need of just a bit more time, and a good mediator. The latter was found in a group of Swiss intellectuals, namely the writers’ association of Berne. In 1948 they invited some French and German mayors to what today would no doubt be called a ‘kick-off meeting’ at Mount Pèlerin on Lake Geneva. As leading historian Corine Defrance points out, French civil society was nudged ‘from abroad (Switzerland) and from above (intellectuals)’.

The third such meeting was the breakthrough. In June 1950 – note: right after the Schuman Declaration – Stuttgart welcomed thirty mayors from each country, many of whom were former resistance fighters, possessing a high level of legitimacy. 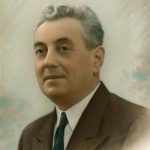 The main driver of the twinning idea was Lucien Tharradin, a former prisoner of war, deported to Buchenwald, now mayor of Montbéliard, in Eastern France. He persuaded his counterpart from Ludwigsburg (Baden-Württemberg) to launch an informal partnership, based on the pretext of historical affinities dating back several centuries.

Tharradin was well aware of the remaining difficulties to obtain the backing of a majority of citizens. In a report on the Stuttgart meeting, he conceded that ‘naturally, the wounds of this horrible war are not healed yet. Too many bad memories remain in our hearts. The road is long and steep.’ But this did not stop his confidence in the initiative. ‘The Germans I met (…) ask us to help them consolidate their democracy. I am absolutely convinced of their goodwill.’

Montbéliard and Ludwigsburg were the first ones in what has become a very long list. But they were not massively imitated right away. Many French mayors preferred to wait prudently before asking their municipal council for the permission to engage contacts in view of a twinning. It is only in the years 1957 to 1963 – between the Treaties of Rome and the Elysée – that the idea really took off. And the creation of the Franco-German Youth Office in the summer of ‘63 provided additional drive, grafting an increasing number of school exchanges on existing twinnings or helping to create them where no twin town was available yet.

It’s a remarkable success story, the secret of which is very fortunate timing, and the presence of a critical number of French actors stubborn enough to convince their fellow citizens that a humanist, confident approach towards their neighbours was worth while trying out. The Germans contributed their part. As so often in post-war history, the citizens of the young Federal Republic were offered an unexpected (some would say: undeserved) opportunity and managed to seize it for their benefit.

Sound bilateral relations on an intergovernmental level are a good thing. But the underpinning of French-German cooperation in Europe by a dense, lively network of people, keeping a general atmosphere of good neighbourhood alive and tangible, is more than that: it’s one of Europe’s jewels, precious and unique.