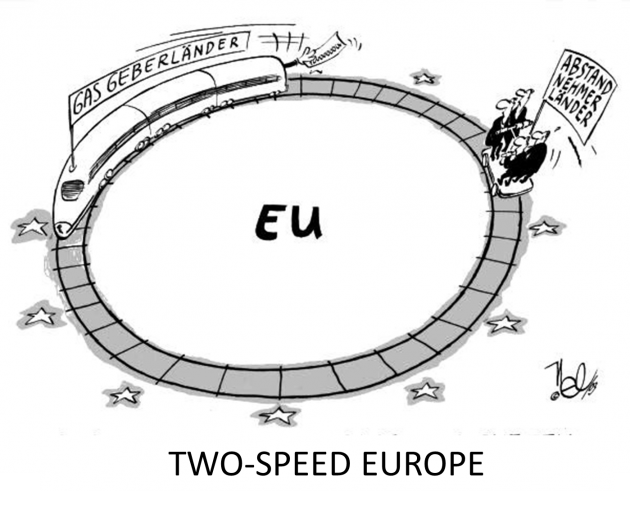 20 years ago, on the 1st of September 1994, two German MPs from the CDU led by Helmut Kohl published a position paper, which bore the innocuous title ‘Reflexions on European Politics’ and which became quickly named the ‘Schäuble-Lamers Paper’ after its authors. The propositions and recommendations formulated in this rather dense document of a dozen pages – still available in German on the CDU’s parliamentary group’s website – had the potential to change the course of European integration.

They could have given a concrete meaning to the principle of subsidiarity vaguely introduced by the Maastricht Treaty but never followed by a genuine implementation plan. They could have led to the deepening of the Union which was expected to precede the great enlargement to the East, but which never really happened for lack of consensus on the finality of integration. They could have facilitated the writing and ratification of a constitution and made the introduction of Eurobonds a logical step of a more restricted but more solidary monetary union. They could have produced a much more profoundly European Germany instead of the increasingly German Europe that we have today.

Could have. For the French élite, the political class and the media in rare unison, preferred not to turn up for this historical ‘rendez-vous’.

What exactly did Wolfgang Schäuble and Karl Lamers propose in their ‘reflexions’? As a matter of fact they called on France to go ahead with the construction of a political Union despite the hesitations of the more reluctant member-states, and to go beyond the mere completion of a big single market. In order to do so, they suggested the creation of what was later referred to as ‘enhanced cooperation’ and what they named a ‘hard core’ of member-states that were ‘both willing and capable to go further in cooperation and integration’. This hard core of the Union was no longer to be ‘blocked by the veto rights of other members’ and was expected to oppose a ‘strong centre’ to the centrifugal tendencies already visible in the Europe of Twelve of 1994.

For Schäuble and Lamers, this ‘Europe of variable geometry’ or ‘multiple-speed’ was an indispensable step on the way to integration not only of monetary policy, but also fiscal, economic and social policies. It was an occasion for the French political class to turn their back on the usual double-speak that consists in deploring the lack of progress in European integration while refraining from ‘making concrete steps towards such integration’ because of the historical weight (or burden?) of a certain idea of sovereignty of the nation-state that was not negotiable.

In hindsight, Schäuble and Lamers were completely right. The reforms and mechanisms they had identified as necessary could have spared the European Union the never-ending leadership crisis it has been undergoing for almost two decades.

But they committed two formal errors. First, they explicitly designated the handful of member-states that, according to them, were most eligible at the time for building the ‘hard core’, namely France, Germany, and the Benelux. Which, obviously, was not much appreciated in Rome and Madrid and was referred to as a ‘German rudeness’ by a Le Monde editorial. Even worse, they used the adjective ‘federative’ in order to describe their conception of the Europe of the future – a word that is as taboo in Paris as it is in London.

These ‘stylistic’ mistakes allowed French politicians and opinion leaders to greet the paper with a deafening silence and some more or less polite refusals. In a France that had already entered pre-campaign for the 1995 presidential elections, no political current could afford to appear playing around with the holy cow of sovereignty.

Yet this was one of the last chances to put Germany to the test. A Germany that was governed by a generation who had known the war, who was committed to the European project to the point of sacrificing the Deutschmark on the altar of the common currency against public opinion, and who had the intimate conviction that it was necessary to anchor their country ever more firmly in Europe in order ‘to save the Germans from themselves’ (as Kohl famously put it).

In 1994 Germany spoke at eye level with France. Today Herr Schäuble is still around, great paymaster of Europe (and thus the Eurozone), still Francophile and federalist at heart, but no longer willing to listen to lessons of Keynesianism given by successive French ministers. Whether Germany – or at least the German government – is still profoundly in favour of political union, is a question of debate. In a remarkable recent working paper, our friend Miguel Otero-Iglesias argues it still is. In 2014 one may have doubts.

In 1994, it certainly was. The story of the Schäuble-Lamers paper is the story of a missed rendez-vous with history, of absence of vision and lack of courage. It confirms the lucidity and pertinence of the French historian Joseph Rovan’s prophesy of 1945: in the new Europe, France would have the Germany it deserves.