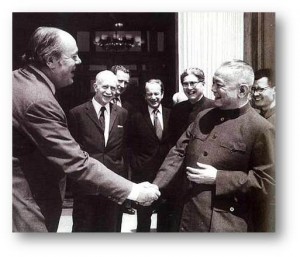 These days, the People’s Republic of China and the European Union celebrate the 40th anniversary of their diplomatic relationship. At the age of 40 one might assume that this relationship has indeed ‘grown up’ by now.

But has it, really?

Here are three indicators supporting this view and three against it:

FOR: China established diplomatic relations in 1975 with the – back then – European Economic Community at a time that is commonly dubbed “Eurosclerosis”, with European integration stalling and a Community that was far from establishing a common foreign policy. The move thus underlines the strategic importance for global politics that China has seen in the European integration project from the very beginning, and even during an era that was clearly dominated by only two Cold War superpowers.

AGAINST: Times have changed, notably the old bipolar
world has come to an end. But even if we believe theories
of a multipolar configuration, there are still doubts
whether the now much more mature European Union,
which even has a face to show to the world, can be considered
one of these “poles” or even an actor in global politics, with
institutional crisis having become a permanent feature
and 28 members attached to their individual prerogatives.

FOR: The trade relationship between China and the EU
is still the largest in the world. For several years now,
China is Europe’s No. 2 partner and Europe is China’s
No. 1 partner. Goods and services of over 1 bn EUR
per day are exchanged between the two economic giants.
Initiatives such as the new investment treaty and
possibly a free trade agreement are likely to foster
EU-China trade further.

AGAINST: If TTIP comes, the US-EU trade relationship may
outperform the Sino-European one. The fact that Europe and
China could not even find common ground in terms of China’s
WTO-status (market economy or not) indicates the level of
difficulty to turn negotiations into concrete outcomes.
What is more, EU-China relations are still based on an agreement
of 1985 as the Partnership and Cooperation Agreement failed.

FOR: Even if international relations are increasingly
dominated by business, investment and economics,
one cannot exclude politics. We’ve come a long way
over the last 40 years in terms of approaching each
other politically. Since 1998 China and the EU have
held annual summits. Politicians at all levels from
China and all member states and at EU-level constantly
meet each other. Chinese has become a popular
language to study and cities such as Beijing and Shanghai,
which host some of the finest universities worldwide,
have become attractive destinations for European
exchange students and vice versa.

AGAINST: Notwithstanding the exponential increase of
people-to-people exchange, a recent survey by the
EU-Asia Institute at ESSCA School of Management
and Oklahoma University has confirmed the negative
perceptions of Europeans towards China, notably the Chinese
government. It is noteworthy that strong trade relations do not
seem to help mitigate the situation: the Germans are among the
most skeptical Europeans vis-à-vis the Chinese.

This blogpost was published simultaneously on the website of the EU-Asia Institute and on Blogactiv.eu.