I have been crossing the river Rhine north of Strasbourg between Iffezheim (Germany) and Roppenheim (France) for as long as my driving licence can remember. In the late 70s and early 80s, passport control and the usual question whether there was anything to declare were part of the ritual (although in a much more relaxed manner than on the checkpoints on the border to Eastern Germany…).

Some years later the border guards were still there but they did not control anybody any more, except some suspect lorries. There were no barriers any more either. What remained, though, was the habit, on the way back, to get rid of your last French Francs in small shops in unlikely places like Soufflenheim, Roeschwoog or Bischwiller. It was only logical that at the beginning of the 1990s, when the guards had left, their post was temporarily turned into a small money exchange house. 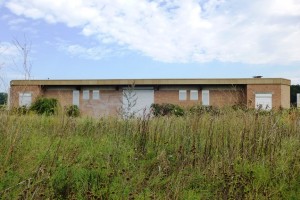 Obviously, once the Euro had come, even the exchange house had no reason of being any more. Since then, the building has been waiting, shutters down, in a kind of wasteland nearby a roundabout where mother nature has taken over.

For more than a decade it did not seem to have a future. But who knows? Now that daily news from the refugee drama that is taking place between Lampedusa and Calais are putting the border issue centre stage again, it has become fashionable among politicians across Europe to put the Schengen agreement into question again and ask for tougher border controls. Clearly the tide has turned since the 1980s when the abolition of borders was celebrated as a civilizational progress and a logical step in the process of European integration.

This is not surprising. The control of territorial borders is a central component of the legitimacy of the classical nation-state. Losing this control – even if on a voluntary basis – is by definition a wound to sovereignty, a phantom pain that fear mongers of all political colours may reactivate any time. It is most likely that in the current circumstances speaking out publicly against Schengen will become (of it has not already) a compulsory rhetorical figure in electoral campaigns in many member states.

While unlikely for the time being, it cannot be totally ruled out that in my driving licence’s lifetime systematic border controls may be reintroduced along the Rhine. If Schengen was to be dismantled, why should Roppenheim be different from Calais?

A nightmare vision for many, especially for all the commuters and travellers between Iffezheim and Roppenheim. If they have recently started to slow down again on the border, it is not (yet) in order to show their passports, but rather their credit cards in the posh factory outlet village that was built right next to the abandoned border post (where ‘more than 100 must-have brands offer you a minimum of -30% off’).

Might as well benefit from the single market as long as it lasts.

Albrecht Sonntag, EU-Asia Institute, ESSCA School of Management.
A French version of this blog can be found here.