20 years ago, when television broke the news around midday that François Mitterrand had died aged 79, the collective emotion in France was almost disproportionate. A surprising number of Parisians simply stopped what they were doing, went to their flower shop, bought one red rose and deposited it on the doorsteps of the former president’s apartment. The rose as symbol for the French socialist party was of course also a reminder of the manner in which Mitterrand had orchestrated his victory in 1981, with the famous televised staging of his tribute to the great men of the left in the crypt of the Pantheon.

I know quite a few people who 35 years later consider that 10 May 1981 was one of the finest days of their entire lives. Seeing the left win the presidential elections was something they never had dared hope for. It was the promise of ‘another tomorrow’ as Barbara sang, the ‘Yes, we can’ moment in contemporary French history. It is probably the memory of that moment that brought so many people to tears on 8 January 1996.

A lucid regard on François Mitterrand’s heritage, however, will reveal a more ambivalent picture, to say the least. Yes, there were the sweeping reforms of 1981/82, with the highly symbolic abolition of the death penalty and the refreshing liberation of the media, the long-awaited social anti-austerity measures, and of course the 5th week of paid holidays for everybody. But these were very quickly followed by the so-called ‘rigour turn’ in early 1983, apparently imposed by the European Monetary System – an economic U-turn which may ring a bell with Alexis Tsipras forced to embrace European austerity policies he had just held and won a referendum against.

Other politicians in other democracies would have kicked out in no time after having turned their back on their promises in less than two years of office. Mitterrand stayed on in the Elysée for another 12 years (!). And that’s exactly where his heritage becomes so poisonous for the France of the 21st century. An extraordinarily gifted power politician endowed with an overdose of Weberian charismatic domination and Machiavellian leadership qualities, Mitterrand has left a series of open wounds to French society and politics that are far from healed 20 years after his death. Three of them are particularly serious. 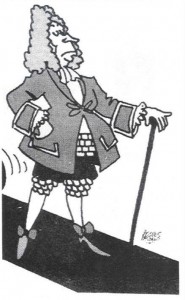 First, in publishing The Permanent Coup d’Etat in 1964, the trained lawyer Mitterrand had clearly shown that he had fully understood the pitfalls of the Fifth Republic with its constitution and presidential regime tailor-made for de Gaulle. He certainly would have had the political clout to reform things, shorten the 7-year mandate, redefine and clarify the respective roles of the president and the government, push for an effective decentralisation rather than a half-hearted creation of fake regions, perhaps even abolish the presidential elections, this curse of French political life. Instead he clang to power over more than a decade (despite a cancer he concealed from the public), cultivated the ‘presidential monarchy’ he had pretended to despise, and seemed to take delight in humiliating right-wing prime ministers during the two periods of ‘cohabitation’ he imposed on the French public in 1986-88 and 1993-95 respectively. Mitterrand could have changed a system that inevitably leads to massive and dangerous frustration, and he did not. That’s even worse than being a lame duck.

The second poison he injected into French politics is the Front National. He obviously only had contempt for a vulgar racist like Jean-Marie Le Pen and took pleasure in his immense intellectual superiority, but he understood very quickly in the early 1980s that this fringe party was about to benefit from the widespread disenchantment with unemployment and growing unease with immigration. For Mitterrand, the emergence of the Front National actually came quite handy. Instead of employing his tremendous authority against it, he instrumentalised the FN for his own power purposes, in order to weaken his Gaullist or Centrists opponents. In 1986, he softened the Socialists’ defeat in the legislative elections by introducing representation and thus allowing the FN to take away 35 seats from the moderate right-wing parties (and gain political legitimacy on the way). Moreover, it does not seem exaggerated to claim that Mitterrand’s manner of clinging to his presidential power, his cunning manipulation of the media and public opinion, as well as the numerous grey zones in his biography contributed to pave the way for the general disillusionment with politics and the renaissance of ugly populism.

The third poison is not entirely of his own making, but it has a lasting impact beyond the borders of France. When in 1990 German reunification threatened to become a reality out of the blue, Mitterrand all of a sudden forgot the Franco-German birthday speeches and his presumed ‘friendship’ with Helmut Kohl, and revealed himself obsessed with German ‘power’ and French ‘rank’. In a series of desperate diplomatic travels he tried to hinder or slow down the process. And when this did not work, he pushed Kohl into publicly sacrificing the D-Mark on the altar of a precipitated common currency, as a token of German commitment to European integration. He was not alone in doing so, and he was already gone when the final details of monetary union were negotiated. But he bears his part of responsibility for the incomplete and immature aspects of the Eurozone that are now causing so many troubles.

The anniversary of the death of a remarkable statesman is always an occasion for nostalgia, especially when his name is linked to days where some things still seemed possible. But it is also an opportunity to look behind the myth-making and story-telling, of which François Mitterrand was an accomplished master.