‘I remember going to London in 1950 to convince you to join the negotiations on the Schuman Plan, but you felt then as you do now that it was not possible to delegate national decision-making powers to a community.’

Said by Jean Monnet on 20 October 1957 at Harrogate, where he addressed the delegates of the Cotton Industry Congress. His quote reflects the mood of the time, which strikingly resembles what we see today. The French Foreign Minister, Robert Schuman, held the same pessimism about British membership in the Community:

‘England will not agree to become integrated into Europe, only if so compelled by events.’

The conclusion for France was not easy. France had to make Europe without Britain and with Germany. Jean Monnet captures that again very well in his memoirs:

‘The bottom line for us was that we had to go on. That is what we did and our relations with you [the British] have developed naturally from that position.’

And he was joined in this position by several other prominent Europhiles in France, e.g. Paul Reynaud, several times minister in the Fourth Republic and staunch defender of the Schuman Plan:

‘(…) we will make Europe without England, because to say: ‘I will not make Europe except with England’, that means, nowadays, “I don’t want Europe at all”.’

This was the great disillusionment about the British position towards European integration, but the door always remained open for Britain to come into the fault. As Albert Sorel, a moderate right-wing deputy of the Assemblée Nationale put it:

‘It remains that England has not understood that she can come back to us, again, and that we can have a common policy.’ 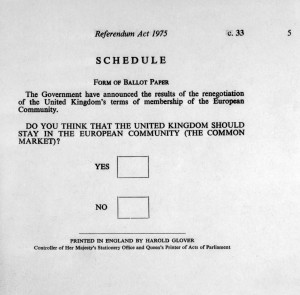 Britain joined in 1973 and remained in the Community by the will of the people expressed in the referendum in 1975. France and later Germany, as the two big founding members, of the Community have never truly understood the British hesitance towards European integration, because, as I tried to show elsewhere , their initial commitment was carried at least partly by an idealism which did not exist in Britain.

It may well be that history will repeat itself: the French and the Germans will accept the decision of the British people should they vote to leave the Union. From that point onward they will take their decisions, as they have done before, between 1957 and 1973. And should the British people change their mind one more time, the door will remain open to come back in again.

View all posts by Thomas Hoerber →