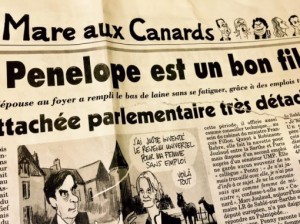 This week’s revelations in the Canard Enchaîné.

Not a good week for French democracy. It started with the communication of false figures from the first round of the Socialist primary, followed by the verdict sending Sarkozy’s former minister Claude Guéant to jail for his ‘automatic cash teller’ practices while in office. It ended up overshadowed by what is now known as #penelopegate, the scandal around the ‘fake jobs’ of François Fillon’s wife Penelope.

A week that looked almost like it was ordered on amazon by Marine Le Pen. Plenty of evidence for the oh, so tempting ‘Tous pourris!’ theory about an establishment that is not only disconnected, but corrupt to the bones. The Front National did not even have to make particular efforts to send the message home: indignation was running high even without them fanning the flames, and they were not too keen on reviving the story of their own MEP assistants paid for working in France for the party…

What is almost touching about the French political class is the stubbornness with which they simply don’t get the point. They seem to live forever in the golden age of the early Fifth Republic, when uninterrupted growth gave them the feeling they were entitled to help themselves to their piece of the cake. Or two. Or three.

Today, especially for candidates who promote strict austerity and collective effort in difficult economic times, all this is no longer acceptable. But like kids caught with both hands in the candy bag, they don’t understand what’s wrong. Listening to the way they defend themselves – from ‘but this is perfectly legal!’ and ‘they mix up gross and net salaries’ (Fillon) to ‘things have always been like this!’ (Guéant) – is a travel back in time. To an epoch when France was entirely impregnated by Catholicism, a place in which sinners were sure to be forgiven and where the accumulation of little benefits and pleasures was considered petty stuff to be dealt with tongue-in-cheek.

This place is no more. Research on consumer behaviour has shown that over the last fifteen years there has been a slow, but continuous change in French consumer’s attitudes which may be linked to an increasing sensitivity to ‘protestant values’ in French society. While it is always risky to stick such labels on movements of social change, there is no doubt that increasing interdependence with a global environment dominated by Anglo-American values has produced some observable shifts.

There was indeed a new sensitivity was not only reflected in increased interest of consumers for environmental issues, organic products, fair trade, but which has also had significant repercussions on the country’s political culture. Traditional cultural auto-stereotypes – a good dose of machismo, disrespect of the law, understanding for petty corruption – were increasingly put into question. There were new laws for gender parity in politics; civil society pressed for tackling the problem of the obscene yearly death toll on the roads; anti-corruption judges adopted a zero-tolerance attitude, including against tax evasion.

True, there is still a large lenience when it comes to extra-marital affairs, but these are rather considered an amusing relic of Versailles court life. François Hollande did not risk an impeachment for having a secret affair with an actor. But he did lose a lot of esteem for spending all this time getting rid of his mistress while buying the breakfast croissants for another, while the middle-class was told to wait patiently for the end of the tunnel. 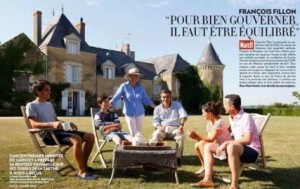 Those were the days. The Fillon family poses for Paris Match in front of their home near Sablé-sur-Sarthe (2013).

Today, after being told for decades the country was in an economic crisis, the French are fed up with the lack of transparency, accountability, and integrity. The generous self-serving practices of the past – hiring one’s wife with an indecent salary for unclear tasks (Fillon) or taking one’s sons in the government jet to watch a Champions League final in Berlin (Valls) are simply no longer acceptable. As the excellent radio columnist Thomas Legrand pointed out this week, the ‘voracious’ manner in which Mitterrand and Chirac benefitted from the privileges that come with life at the top of the state would today be ‘assimilated to kleptocracy’. Public opinion has moved, while politicians, as if they wanted to provide evidence for just how disconnected they are in their Paris power bubble, have not moved an inch. Many of them even refuse to implement the law prohibiting the age-old practice of serving several mandates concurrently (the famous cumul des mandats’)!

Fillon, and all the others, will have to learn it the hard way. It is difficult to imagine that the strategy mix of self-victimisation and conspiracy theory will work over a three-month campaign. Perhaps with some die-hard party followers. But not with the mainstream French middle class he was courting so desperately with his image of ‘probity’ and ‘rectitude’.

The harm is already done, as two recent polls attest: a SOFRES poll for Le Figaro had Fillon down to only 22% of intentions for the first round of the presidential elections and, worse, credited him with a mere 60-40 win in a potential face-off with Marine Le Pen. And according to an Odoxa poll for France Info, Fillon’s approval rate has gone down from 54% to only 38% since last November. Even in his own party, only 48% consider him ‘honest’…

Not a good week for French democracy. Unless, of course, the events and their consequences finally sound like a wake-up call to the French political class, ideally with tangible effects beyond the election deadlines. In which case, it would have been a good week after all.

This is post # 11 on the French 2017 election marathon.
All previous posts can be found here.