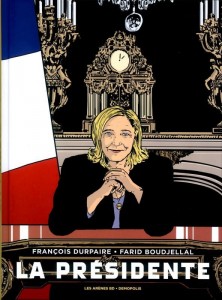 What if the good old ‘scarecrow’ effect did not work anymore? What if Marine Le Pen managed to break the famous ‘glass ceiling’ of the French electoral system, which has kept her out of governmental responsibility so far? What if voters were no longer willing to rally around a ‘front républicain’ between round 1 and 2 of the elections?

These are questions that would have sounded purely hypothetical some months ago. But are they still?

True, the French electoral system and institutional framework have always been the best allies of those for whom the vision of a triumphant Le Pen family member in the Elysée is nothing short of a Republican nightmare. History seems to be reassuring: at both the 2002 presidential election and successive legislative and regional elections, the time between the two rounds has always proved sufficient to form an ad-hoc coalition behind the remaining opponent. And simple maths also provide comforting evidence. It is difficult to imagine Marine Le Pen double the absolute number of voters between round one and two.

Yes, she does have an extremely stable base of 25% of the electorate, but there is little risk that ‘MLP’, as she is referred to in Twitter initials (while on her posters she prefers to drop the family name altogether), will obtain a surprise score that will put the pollsters to shame. As a matter of fact, now that publicly coming out as an FN sympathiser is no longer taboo, the polls concerning voting intentions are actually more reliable than they used to be. How exactly she could manage to attract the massive and unprecedented transfer of voters from all sides that she needs in order to win the final face-off remains unclear.

So it’s all about keeping calm and carrying on? The traditional politicians from the left and right – a species that has not realised yet it is under the threat of extinction – still want to capitalise on the scarecrow effect. François Fillon, for instance, is now desperate enough to warn his compatriots that in the case of his elimination in round one, the vast majority of his voters would turn towards Le Pen, if only to avoid Macron. And at the PS headquarters in Rue Solférino, Jean-Christophe Cambadélis pretends to see the writing on the walls of Donald Trump’s surprise victory in order to motivate the Socialist troops or what’s left of them. It all sounds like hollow scaremongering because it is too obvious they do not believe what they’re saying. Nothing but a kind of French ‘Project Fear’, and we know how efficient the English one was.

But can the nightmare really be ruled out? In a campaign where nothing is stable except the voting intentions for Marine Le Pen, where every further little scandal (not to mention strange rumours of all kinds) invariably seem to play into her hand, where an entire ‘internet army’ (brilliantly investigated by Nicholas Vinocur) is at MLP’s service, no scenario should be excluded. The very system that has always kept the Front National out of power will continue to work in its interest: with no governmental responsibility despite massive electoral backing the FN has not suffered any loss of credibility in its anti-establishment posture and will continue, all throughout the campaign, to capitalise on its comfortable status of sole untested alternative. That’s a unique selling point, providing a solid basis for an unexpected last-minute swing that could be due to the big unknown variable of these elections, the degree of ‘fed-upism’ of French citizens that may result in a shockwave of irrepressible ‘kick-outism’. With a little bit of imagination, you can already hear the electorate prepare the lamp-posts for the great hanging: ‘Ah, ça ira, ça ira, ça ira! Les aristocrates à la lanterne!’ 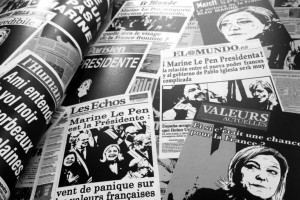 François Durpaire, for one, has no trouble at all seeing ‘La Présidente’ behind her desk in the Elysée. A historian and rather well-spoken television pundit on American politics – he’s a co-author of the French edition of ‘The United States for Dummies’ – Durpaire anticipated her victory in 2015, together with the illustrator Farid Boudjellal, in a remarkable graphic novel. In its highly realistic black-and-white aesthetics, and visibly based on thorough documentation, ‘La Présidente’ imagines a post-2017 France in the tradition of Orwellian dystopia. The book displays particular lucidity in depicting how self-referential media loops may create a hysterical sound cloud that eventually erupts in perfectly irrational voting behaviour (rings a bell? or two?). Despite a somewhat disappointing ending that indulged in the same kind of conspiracy theory on which populism itself flourishes, the book and its authors well deserved their success, with 120,000 copies sold.

In 2016, Durpaire and Boudjellal, published a sequel named ‘Totalitaire’ and set in a 2022 France that I would most likely have left in the meantime. While the graphics are just as brilliant, the scenario has some flaws, but overall the authors deserve praise for effectively highlighting the sheer fragility of democracy in an age obsessed with identity and security.

Reading these two graphic novels makes you hastily draw your wish list for 2017:
May the old scarecrow effect have kept at least some of its relevance!
May the ‘glass ceiling’ of the French electoral system prove more resilient than one might fear!
And may the French themselves be collectively smart enough to resist the temptation of hanging their entire political aristocracy at the lamp-posts just to relieve this itchy feeling of disgust.

This is post # 12 on the French 2017 election marathon.
All previous posts can be found here.