Ready to welcome the fake president.

They did it again! They made us believe that the Fifth Republic provides its president with a particularly wide array of prerogatives, little constrained by checks and balances, and reigning well above the heads of a weak parliament. And with all the hype around the presidential election, this highly personalised ‘encounter of a man with the people and the circumstances’, as the oft-quoted Gaullist saying goes, the illusion of ‘power’ has been nurtured again over several months.

And we seem to swallow it against better knowledge! If the last thirty years have taught us anything about the functioning of this strange Republic, it is that the perceived weight of the presidential election, with its ideological theatricality, its heroic destinies, and its absoluteness in the refusal of compromise, is inversely proportional to the capacity of the office holder, once elected, to bring about change.

The notorious powers of the French president are a myth. And the axiomatic weakness of the French parliament is not a structural one, but depends strongly on the configuration. Paradoxically, the Assemblée nationale is particularly paralysed when the newly elected president is provided with a stable majority in the legislative elections, as it was the case in 2007 and 2012. All of a sudden, the centre of power shifts towards the Elysée, the Prime minister becomes a ‘collaborator’ (i.e., a lightning rod) fired or maintained at will, and the only possibility for members of parliament to exert their control function is to become ‘frondeurs’, a job description that mainly consists of extensive, ostentatious sulking. Which the prime minister then mutes by invoking the famous no-confidence article 49-3. 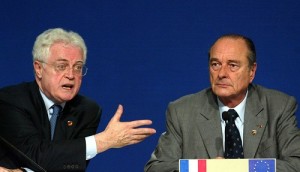 On the other hand, as three different periods of ‘cohabitation’ have shown in 1986-88, 1993-95 and 1997-2002, when the president, following legislative elections, is obliged to choose a prime minister from the opposite part of the political spectrum, he stands very quickly very naked, a mere by-stander of governmental decision-making, trying to save face by attending European summits and G7 meetings, as well as holding a 14 July garden party and pronouncing New Year’s wishes. While Lionel Jospin was in office, between 1997 and 2002, Jacques Chirac tried very hard, but in vain, not to be a side-lined head of state, helplessly watching how, for instance, the 35-hour week was introduced by the leftists of His Majesty’s own Government.

Chances are matters will get even worse in 2017. Whoever will win the presidential contest on 7 May is likely to inaugurate a new era of ‘fake presidents’. None of the front-runners can seriously hope to be given a full-fledged majority in June. But all of them are avoiding the issue! 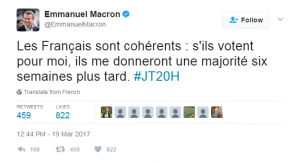 Emmanuel Macron, to name just one of them, simply repeats on television and Twitter something vague about the French citizens being ‘very coherent’ and certain to provide him, should he be elected, with a stable majority one month later. I am not sure that we live in an age where the coherence of voting behaviour is a safe bet. And most of his yet-to-be nominated candidates, many of them newcomers to politics, will face in their constituencies some staunch resistance by incumbents of all sorts.

So what are the realistic options? Is there a textbook for the aspiring president on how to run a democracy held hostage by a constitution that simply does not fit reality?

Ruling by decree? That may be in the textbook for ‘How to become even more unpopular than Sarkozy and Hollande in only three months’. Building a stable coalition in a fragmented parliament? An exercise for which the Fifth Republic provides no textbook at all (and which is somewhat delicate after a highly antagonistic presidential battle that requires massive and repetitive discrediting of all possible partners). Building ad-hoc coalitions for each and every one of the needed reforms? Well, there are many textbooks dating from the Fourth Republic, and perhaps some to be translated from Italian, but one may have doubts about their efficiency. 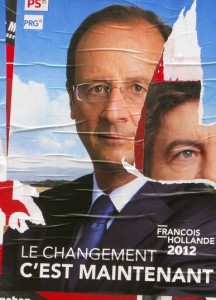 The only way out seems to be a regime change in all but name. Putting the proportional vote on the Elysée table as early as mid-May and making it clear to the French that they are going to vote in June for an Assemblée nationale that will have a life expectancy of no more than, say, 18 months, before new elections under the new electoral system will be called. This would at least put an end to the disastrous effect of the ‘quinquennat’ reform of 2000, which welded the presidential and legislative elections together in their current counter-productive sequence.

This will take some courage. And the road towards the new Republic is going to be very bumpy. But it would allow the new tenant of the Elysée to be more than a ‘fake president’ and give a very unexpected second life to François Hollande’s ‘fake slogan’ of 2012: ‘Le changement, c’est maintenant!’

This is post # 16 on the French 2017 election marathon.
All previous posts can be found here