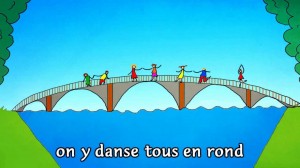 It’s the first thing the French check out when they’re back from their summer holidays and ‘La Rentrée’ – that fateful moment when normal life resumes in early September – is looming again: on what day of the week will the national holidays fall in the forthcoming school year? 1st and 11th November (All Saints and the 1918 Armistice Day respectively) are only worth a quick look – the weather won’t be too enticing anyway. The days who really count are the ‘Bridges of May’ (‘Les ponts du mois de mai’): Labour Day on the 1st, and Victory Day on the 8th. If they fall on a Sunday, you’ll feel like you’re cheated on by some dark forces; but in a good year, when they fall on a, say, Tuesday or Thursday, everything is set for some lovely ‘ponts’, which consist of slipping just one paid vacation day between the weekend and the holiday and enjoying the pleasure of a prolonged spring break. Or two. Or three, actually, since Ascension Day (courtesy to the Catholic Church) is guaranteed to fall on a Thursday.

Some serious economists and exasperated business leaders have repeatedly suggested shutting down the entire country for the entire month of May. Which, true enough, would make things clearer for both international business partners and French HR departments. But France would no longer be itself without the Bridges of May – they will most likely end up on the UNESCO cultural heritage list.

Rarely has the ‘bridge’ metaphor been more fitting than in 2017. Both 1st and 8th May are indeed bridges, pathways from A to B, where the river to cross stands for the presidential election and ‘B’ stands for ‘Unknown Territory’. Whoever wins next Sunday, the Fifth Republic will no longer be the same, and the sudden awareness of the great uncertainty that lies ahead is dawning on the French since the 1st-round results flashed up on their TV screen.

The 1st of May 2017 is the bridge to an unprecedented campaign week, with Le Pen’s hate speech dictating the agenda and the news channels her hypnotised prey, shuddering with excitement at the slow converging of the poll curbs, as if they were witnessing a football cup final where the underdog pushes the favourite towards extra time (and we all know that in penalty shoot-outs, everything is possible, don’t we?).

The 8th of May 2017, rather than a day of relief that the campaign is finally over, is likely to be a day of collective breath-holding: ‘And now? What next?’ A one-day bridge that leads to the next campaign, just as tense as the previous one, and even more unpredictable. How many of the 577 constituencies will be shaken by a major upheaval, no one can tell. 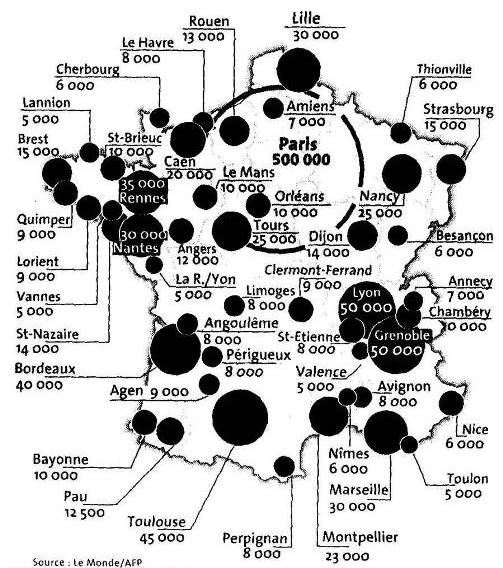 Fifteen years ago, things were so much clearer. The shock of seeing Jean-Marie Le Pen’s grandfatherly smile on the campaign poster for the second round was deep, but it occurred in a familiar setting, with perfectly predictable reactions – massive demonstrations all across the countries over the 1st-May bridge – and outcome: the election of Chirac, and a return in no time to party politics business as usual, as if nothing had happened.

For many French – especially those who had sanctioned Lionel Jospin in the first round because he had not been ‘left enough’ – there was even some kind of self-gratifying redemption in the opportunity to demonstrate against the Front National and defend democracy. Plantu even adapted the ‘bridges’ metaphor to the situation in one of his cartoons for Le Monde. In a rather naïve manner, it seems to me (unless there is some hidden, grave irony that is lost on me). 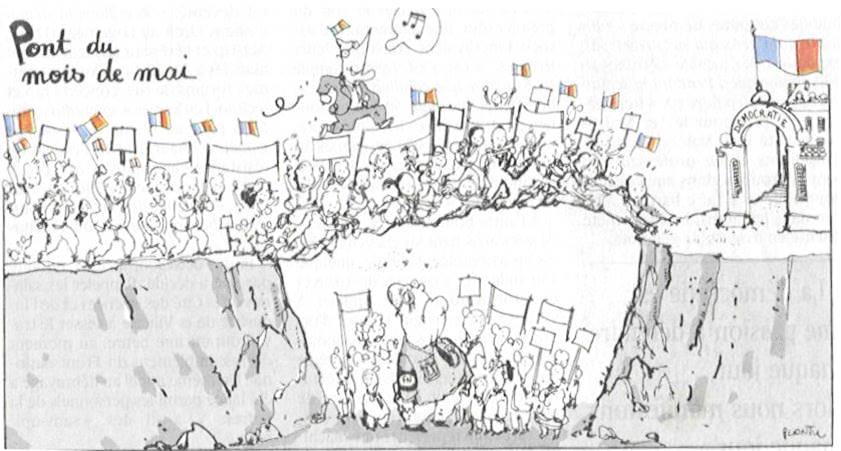 This year, no one knows where the bridge is leading to. A new frontier, full of opportunity? Or a rather scary place, where old landmarks provide no orientation anymore? Or nowhere at all, like the beautiful, but useless Pont d’Avignon? The legislative elections will be a passage to a very complicated summer, with shady majority-building manoeuvres and murky arrangements rather than light-hearted sunbathing. If the country is lucky, some kind of half-baked solution will have been found by the end of August, when ‘La rentrée’ is looming again. If not, the best possible quantum of solace will be the yearly calendar check: 1st and 8th May will be Tuesdays! And Ascension Day will be on Thursday 10th! Who needs a stable government over autumn and winter, when you have perspectives like this for next spring?

This is post # 20 on the French 2017 election marathon.
All previous posts can be found here.