Emmanuel Macron’s entry on the diplomatic scene – from the NATO and G7 summits last week to the meeting with Vladimir Putin on Monday – may already be regarded as a positive and very encouraging achievement, but everybody, in France and elsewhere, agrees that the new President’s real and primordial challenge is the capacity to carry out the domestic reforms.

In a country that has the hard-earned reputation to be unreformable, the realisation of his economic and social agenda is what Macron will ultimately be judged upon. He has one unsuspected ally: a large part of the French public has fully understood that the retirement age needs to be adapted, that fiscal policy needs a serious overhaul, and that a stronger influence on the EU comes only with respect of the deficit rules and evidence of new growth potential.

And many of them have also realised that French labour law and labour relations result in a kind of societal contract that serves everybody well, except the unemployed and job-creators. Some have named the determination with which different stakeholders protect the status quo of manifold vested interests, ‘the collective choice for unemployment’. The result is a mixture of extreme reluctance by small and medium-sized enterprises, even at times of entrepreneurial success, to hire new employees on a permanent basis (the highly protected Contrat à durée indéterminée), and the simultaneous incapacity of the system, to avoid large layoffs and social plans in the wake of the country’s continuing de-industrialisation.

If all attempts at reforms aiming at making the labour market more fluid have failed over decades, the reason has been a strong popular resistance fueled by the logic of class struggle. Each time the trade unions have managed to reactivate the fear of the dismantling of the ‘French social model’ – the French emotional knee-jerk equivalent of the ‘NHS’ – and each time the government in place has been unable to overcome the discrepancy between radical ideological principles and practical economic constraints, between the desirable (in the absolute) and the feasible (within the social-democratic, but capitalistic default setting of contemporary Europe).

This time around, the key will lie once again with the trade unions. Unlike their German counterparts, the French unions have always been characterised by ideological pluralism rather than unitary organisation according to industrial sectors. This automatically results in fierce competition for membership among them, which in turn leads to rhetoric grandstanding in negotiations and over-bidding each other in drwaing ‘red lines’. Trade unionism has always been a minority movement in France, but it has successfully claimed the moral right and duty to speak for the ‘unenlightened’ majority (and take the entire country hostage in their fight). 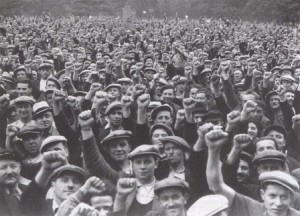 The ideological roadmap of French trade unionism was graved in stone in 1906 in the so-called ‘Charter of Amiens’ (the capital of Picardy which, in a nice coincidence, happens to be Macron’s birthplace and the theatre of one of weirdest moments of the recent election campaign around the aptly named Whirlpool factory).

This manifesto whose radical anti-capitalism has never really been put into question has deeply impregnated the language of French social relations. Its major semantic component is distrust. Managers and even self-made entrepreneurs are by definition class enemies. A company’s overarching goal can only be profit maximisation by ruthless exploitation of workers. Compromise is treason. Accordingly, German style co-determination practices are looked upon with defiance. Which is understandable, given all the negative connotations conveyed by the vocabulary in vigour. Unlike the German ‘Arbeitgeber’ (= ‘providers of work’), the French term ‘patronat’ reduces this specific social group to its purely hierarchical dimension of domination. The etymology of ‘patron’ reveals of course its religious, medieval roots, inevitably smelling of pre-industrial authority structures and inducing neo-feudal perception and behaviour patterns. Not exactly what you would call ‘social partnership’.

‘Hang all the bosses under the Avignon Bridge.’ French semantics with charming smiles.

These are no doubt the reasons why in 1998 the French employers’ federation changed its name from CNPF (where ‘P’ stands for ‘Patronat’) to MEDEF (where it is replaced by ‘Entreprises’).

Unfortunately, its representatives have had trouble changing their own rhetoric accordingly, and their internal power struggles often lead to the same kind of stupid over-bidding as on the trade union’s side. Their current president, Pierre Gattaz, is no exception to this rule, regularly missing excellent opportunities to just shut up for a while.

In a lovely compendium on French-German stereotypes and contrasts published twenty years ago, Ingo Kolboom very rightly recalled in his contribution about labour relations in both countries that ‘words are more than just designations; they are complex interpretations of reality, transformations, repressions, and projections, the support of desires and social strategies’ (R. Picht et al., Fremde Freunde, Munich, 1997, p. 268).

France offers a linguistic and cultural environment in which trade unions simply have no choice but systematically base their actions on an unwavering presumption of contempt (‘mépris’) with regard to employers’ attitudes towards employees. Which in turn explains that strikes or similar radical actions, rather than being the ultimate means of struggle once negotiations have failed or justified requests have remained unanswered, are in fact a pre-condition of negotiation. They are called with the aim of increasing bargaining power and they inevitably raise the face-saving stakes on all sides by lifting discussions from pragmatic deal making to the level of moral indignation.

Such is the minefield that Emmanuel Macron has chosen as his first area of reform. The speed with which he and his new Prime Minister Edouard Philippe have already invited each single trade union leader for long, individual dialogues to both the Elysée and Matignon give evidence to their determination, whatever the outcome of the legislative elections. 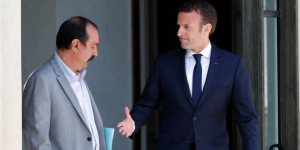 Holding out a hand to the trade unions: Emmanuel Macron and Philippe Martinez from the CGT.

Surprisingly, what clearly has been a suicide mission for any government of the last twenty years, all of a sudden does not even seem out of reach any more. Listening to the very careful wording of the trade unionists these days, one cannot help but find they are somehow aware that the new President has managed to install a ‘now-or-never feeling’ in the country over the last weeks. They seem to feel that ‘the times they are a-changin’ and for the time being, they don’t want to be the ones that ‘stand in the doorways’ and ‘block up the halls’.

Macron’s tightrope walk is the most passionate political endeavour this country has seen for a long time. It’s more than a reform. It’s full-size cultural change in the making. If he manages to shift the semantics of labour relations from the lexical field of class struggle to a Monnet-inspired new vocabulary of common interest and joint effort, he will have achieved more in a few months than others over their entire mandates.

This is post # 23 on the French 2017 election marathon. All previous posts can be found here.