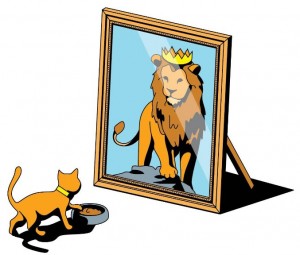 In early August, FT columnist Simon Kuper dedicated his weekly piece to the three ‘enduring flaws’ of British politics as revealed by Brexit. His (rather devastating) diagnosis – ‘substance-free, hot air’ rhetoric instead of political debate, ‘the ruling class’s insularity’, and ‘delusions of grandeur’ – was accompanied by a delicious illustration by Harry Haysom. The cartoon showed a cute, harmless little cat that sees itself in the mirror as the powerful Lion King dominating the world from the top of its mountain rock (or was is the cliffs of Dover?).

Spot on. What the Brexit drama reveals in broad daylight is the abyss between the British political class’s self-perception and the reality as seen by the outside world. The process rather brutally exposes a political elite that is entirely inward-turned, possessing next to no intercultural competency, but happily seeing the country as ‘a beacon to the world’, to recall one of Tony Blair’s favourite catchphrases. A nation to whom leadership is granted by divine right, on the basis of a ‘finest hour’ that certainly has its rightful place in the history books, but which tends to eclipse the fact that history has not stopped in the middle of the 20th century.

It is inevitable that for such politicians the rude awakening of Brexit realities is a very humiliating experience. Just like membership of the European Union is by definition humiliating for sovereignty-obsessed nation-states. Even more so if you join only out of necessity and are turned down by an arrogant Frog before finally being allowed in. In a thoughtful ‘Dunkirk’-inspired piece in The Guardian, Raphael Behr has nicely laid out how ‘the seeds of Brexit were sown with the foundations of EU membership’.

If ‘humiliation corrodes the soul of nations’, as Behr writes, we are heading for some massive corrosion, a vicious circle of bitterness that distorts even further the perception one may have of oneself and the others. It is almost understandable that a government that is clearly not up to the job rather spends its time and energy preparing a slander campaign against the usual scapegoats that will be to blame for their failure. The tabloids will be happy to join the choir: the French will be, of course, ‘plotting to keep Britain down’, while ‘spiteful Eurocrats’ will be ‘seeking vengeance’, and ‘the Huns’ secretly plan to ‘drown the UK with migrants’.

The lovely FT illustration by Harry Haysom reminded me of another cartoon of a quarter century ago, published in a much less prestigious regional German newspaper. The simultaneity of the Brexit negotiations and next Sunday’s Bundestag elections were an excellent pretext to take it out of an old course syllabus safely stored in the attic. 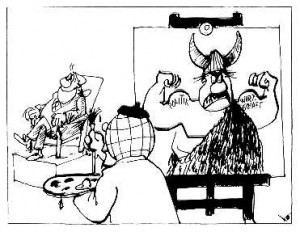 The drawing (by caricaturist Egon Kaiser) features the so-called German ‘Michel’, a stereotype character representing the average, unsophisticated German, usually shown with a nightcap on his head. Contrary to Harry Haysom’s cat, he does not sit in front of a mirror, but is being portrayed by an artist, whose globe-shaped head indicates that he is supposed to represent ‘the world’. On the canvas we can discover the almost finished portrait of the harmless ‘Michel’, who is perfectly unaware of the picture that is made of him: a half-Viking half-Neanderthal brute that shows its economic and political muscle.

The cartoon obviously refers to the moment of reunification and the fears that the new Germany inspired to its neighbours, including the British government, as documented in the famous Chequers seminar convened by Margaret Thatcher in March 1990.

In hindsight, it almost looks like a premonition for what has more recently become known in European Studies as ‘Germany, the reluctant hegemon’ (see for example here, here, here, and here). True enough: never since the end of World War II has Germany had more influence in European and global affairs, precisely because it not only has economic weight but also political clout, the latter accumulated mainly through faithfully being itself and playing the role of a somewhat boring, but stable and very reliable partner within the EU and the international community. In addition, it is fair to say that the Federal Republic turned out to be very lucky in terms of its political human resources. Still, despite a certain ‘normalisation’ with regard to the defense of national interests, the reluctance to assume leadership in all its consequences is still tangible, both in public opinion and the political elite.

Since 1949, Germany has been an incredible success story of political re-education and stabilisation. Whatever one may think of the policies pursued by its successive governments, there is no denying that the Germany’s institutions are of a rare equilibrium and stability. As the Bertelsmann Foundation’s most recent eupinions poll shows, 63% of Germans are satisfied with the way their democracy works, significantly more than in any other of the large member-states.

The sad irony, in this summer of 2017, is that the country owes so much of its success to the British! It’s the UK that, together with its Western co-occupiers, gave Germany the tools and material that enabled them to lay the foundations of a new democracy. They actively supported the reinstatement of federalism in order to counter-balance any tendency for yet another Reich. It’s the UK that served as role model for a parliamentary regime acutely aware of the separation of powers. And it’s the British example that inspired the new media landscape, with audio-visual services that were both public and independent, and an overall remarkably moderate press ensuring a healthy pluralism of voices within the democratic-liberal order.

It’s a cruel and painful coincidence to see Britain dismantle its own model, while Germany is preparing for yet another reassuring election. Under Brexit strains, the UK’s own kind of federalist structure turns out to be a more than fragile bond between the home nations. The Repeal Bill is a pretext for dispossessing Parliament of its prerogatives for the benefit of an executive composed by political personnel whose main virtues are not exactly courage or visionary helmsmanship. At the same time the judiciary is libelled ‘enemy of the people’ and quality journalism accused of being unpatriotic, while the vociferations of a cynical tabloid press have managed to make the language of jingoism and xenophobia, once the preserve of a small right-wing fringe, become mainstream vocabulary.

One of the emblematic representatives of this press, The Sun, recently (8 Sept.) published a diatribe in German language (or what they thought was German), accusing Jean-Claude Juncker and Michel Barnier (‘a cognac-soaked clown and a puffed-up dandy’ respectively) to stand in the way of a trade deal that would be very beneficial to German industry. Reminding their imaginary German readers of the huge importance of the British market for ‘Volkswagen, BMW, Mercedes, Siemens’.

Rather than flattering what they presume to be German economic interests, the authors of the piece would have been better advised to watch the television debate between the two Spitzenkandidaten for the Chancellery. While there was much talk about Europe, neither the UK nor Brexit were mentioned, not once! The Lion King in Harry Haysom’s mirror is no longer on the screens.

If the situation were not so depressing, one would be tempted to jokingly draw parallels with the label ‘Made in Germany’ invented by the English in order to disparage the inferior quality of German goods and which in 2017 remains the world’s most trusted trademark. Or with football: its English inventors proudly sing ‘Football’s coming home’, while the Germans have won three World Cups and three Euros since England’s only trophy in 1966. But somehow even these running gags have become less funny these days.

Germany is a more vulnerable economic hegemon than most Germans think. Its industrial power probably owes more to good fortune (globalisation) than to the oft-quoted ‘reforms’ under Gerhard Schröder or the (remarkable) know-how of its engineers. Hubris is not far, and decline lies in a future that is nearer than most Germans currently think. But Germany has already had some difficult moments, and contrary to what is currently happening in the UK, it remained respectful to its own institutions and faithful to its collective project of embeddedness in a European community. 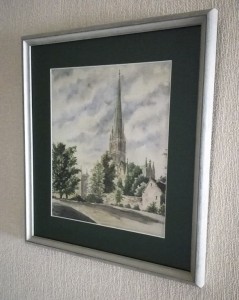 Watercolour of Salisbury Cathedral (anon.). Bought and taken to Germany by PoW Wilhelm Sonntag in 1948. Now on display in Bouchemaine, France.

My father was a Prisoner of War in England, spending three years in Gloucestershire before returning home in 1948. He had the highest esteem for British society and politics. He strongly appreciated the solidity of the UK’s institutions, the stubborn insistence on non-negotiable individual liberties, the healthy scepticism for big ideologies, and this widely shared idea of ‘decency’ that in his eyes held Britain together.

He liked the new Federal Republic his generation was offered in 1949 and contributed as an active citizen to making it into a decent place over the decades that followed. When the UK joined the EEC, he smiled empathically at the difficulties successive British governments had in adapting to the idea of pooled sovereignty. He never excluded the possibility that one day an anti-European PM might lead the UK out again of this community – after all, this would not have been meant the end of ‘decent’ relations, would it? What he would never have imagined is that Britain would one day frantically undo the essence of Britishness.