The abundance of metaphors that football holds in store for politics is amazing. Used by tongue-in-cheek commentators like Anand Menon – who recently compared the successive Theresa May speeches in Florence and Manchester to a European Cup away game and return leg – they can be funny and meaningful. Used by leading politicians – remember Tony Blair comparing the Iraq war to a football match? – they often fall flat, if they are not downright embarrassing. 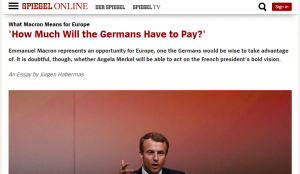 And now even Jürgen Habermas has given in to the temptation! Speaking of Emmanuel Macron’s remarkable Sorbonne speech on the future of European integration, the great German philosopher urged the German government in a recent article for the Spiegel (available in English), to “take possession of the ball kicked into their half of the field by the French president”.

That’s actually a very well-chosen image. But it’s incomplete. Even if the new, hopefully-soon-to-be-fixed German government should take possession of the ball, what is needed is immediate, intensive ‘Gegenpressing’. 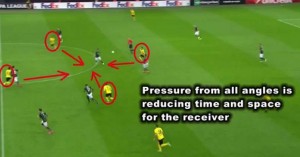 For readers not too familiar with the intricacies of football tactics, it is worth explaining that this lovely, though somewhat barbarian, half-German half-English neologism, has been theorised six or seven years ago by coach Jürgen Klopp, thus putting a label on a style of play already practises elsewhere. ‘Gegenpressing’ is meant to destabilise a stronger opponent who favours ball retention and possession in order to have control of the game. According to Professor Klopp, it’s just after having regained the ball that such teams are most vulnerable, because they do not expect the other team to keep on harassing them immediately. Applied perfectly, ‘Gegenpressing’ costs a lot of energy, but opens unexpected breaches in the opposite defence.

Listening to how German political class is currently reacting to the propositions put forward by Emmanuel Macron in his recent speeches on the future of Europe, it is difficult not to consider that the German side could do with a good dose of insistent ‘Gegenpressing’.

At this moment in time, the German government resembles on of these teams that have dominated the game for years. Basking in the glory of past successes they do not realise they are already in decline. Convinced of their power and superiority, they refuse to open to new ways of playing, pretending that their ‘supporters’ would not appreciate.

This is a serious error of perception, both in overestimating one’ own forces and in maintaining a condescending, self-righteous attitude towards the ideas of a young ‘manager’ who promotes a different approach to the game.

Clearly, the football metaphor is not so far-fetched after all, if one applies it to what Habermas calls ‘the smug self-deception’ and ‘patronising approach’ of both German politicians and media, who have welcomed Macron’s propositions with ‘self-defensive anticipation’ or haughty refusal (especially on the side of the FDP, who have visibly decided to throw over board the cumbersome pro-integration heritage of Hans-Dietrich Genscher’s generation).

Will Macron succeed in putting the German defence under pressure? One may hope so, as Habermas does, who speaks of the new French president with a surprisingly explicit, very unhabitual admiration.

What may play in his favour is that the German political class has not yet fully grasped the extent of his determination, considering he was elected by default in order to avoid Marine Le Pen, on whom the German media had made an almost obsessional fixation during the entire election campaign. Contrary to Habermas, they underestimate Macron’s rather impressive resolve to proceed to a relaunch of European integration, and in their comfort zone of unofficial masters of an intergovernmental EU that protects German interests and lectures everybody else about ‘doing one’s homework’, they have trouble imagining that the head of a national executive actually dares putting a different Europe actually right on top of his agenda.

In the certainty of their supremacy on the European pitch, German politicians are no longer used to continuous and stubborn ‘Gegenpressing’ by seemingly weaker rivals. It will be nice to watch how they it will destabilise quite a few of them.

Once the current coalition ‘mercato’ is over and the new governmental squad is in place, we might well see a different game of ideas imposed on them. Emmanuel Macron is capable of playing long passes behind the back line and resist the pressure of dominant tactics of Euroscepticism. He is not yet worn out by the interminable European fixtures played in Brussels and elsewhere and has the stamina to go into extra time if necessary. True, he has the tendency to become intoxicated with his own brilliance, and not all of his moves are brilliant just because they have the Macron touch, but he is not one to be intimated by the roar from the terraces.

Will he manage to impose his vision of Europe on the German side through well-timed, obstinate ‘Gegenpressing’? It’s too early to tell, but at least we may look forward to watching a more fascinating match.