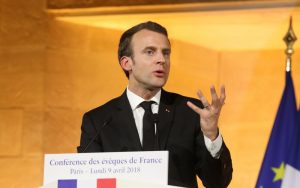 „I do think that we can build efficient politics; politics that escape ordinary cynicism and engrave in reality what must be the foremost duty of political action, I mean human dignity.”

Who would want to contradict Emmanuel Macron on this point? Certainly not the venerable ‘Episcopal Conference of France’, to whom he addressed these words on 9 April. And even less the German-born blogger, whose own Republic, after all, made human dignity (for good reasons) the top priority of its own constitution.

There is, however, a not insignificant number of French citizens who, the President’s noble words notwithstanding, feel violated in their dignity and are making it known on numerous parallel battlefields: from the train stations and universities to the slightly anarchist ecological guerrilla on the fields of the buried airport project in Notre-Dame-des-Landes.

Is it a first revolt against the uninterrupted reform stress after a year ‘en marche’ with Macron? Or is it an echo of the romanticised ‘Révolution’ of May 68, with which a vast majority of the French associates positive social change and the memory of which is currently celebrated on all media channels with great tenderness for those bygone days of innocence? 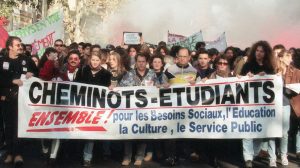 There is probably a bit of both in the current protest movements. True, the oft-quoted ‘convergence of social struggles’, invoked by the trade unions and conjured up by the Left around La France insoumise, does not seem to occur. Everybody remains focused on their own concerns and demands. Neither do the strikers represent a majority within the SNCF or among the students, quite the opposite.

Macron and his government know this, and they will emerge as the winner from the current battles. The railway reform will be pushed through rather recklessly – just watch the ‘No chance!’ of Macron when asked by Fox News whether he might give in to the strikers. And the universities will calm down again once an improvement of the admittedly imperfect admission procedures will have been commissioned. But it will be a very ambiguous victory, for it will leave behind losers who were not just defeated in a labour struggle, but will fill lastingly humiliated, violated in their dignity.

The key to understanding the sheer bitterness expressed by the railway workers and students lies in the immense perception gap between the citizens and the government. The latter sees itself as ‘pragmatic’, ‘steadfast’, and ‘honest’, since it was announced well before the 2017 elections that citizens would be confronted with a demanding ‘transformation of French society’ and that a high level of willingness for change would be requested. Its arguments are factual, buttressed by the technocratic shrug of those who ‘objectively’ know better.

As for the protesters, they moved almost instantly to a very different semantic field. They are mobilised by what they feel to be ‘contempt’ and ‘humiliation’, no matter whether the cause they defend is the civil servant status of the railway workers, the taboo of non-selection at university entrance, or the vision of a collectivist, ecological agriculture as in Notre-Dame-des-Landes. 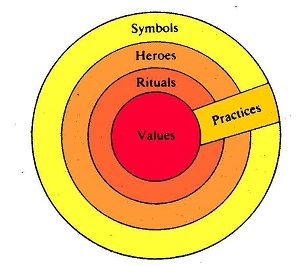 They are in coherence with the inner core of Geert Hofstede’s famous ‘culture onion’, where the (most often unconscious) fundamental assumptions of a given (most often national) culture lie, shared beliefs about what is right or wrong, beautiful and ugly, clean and dirty, noble and debasing.

In several books based on his research in comparative anthropology Philippe d’Iribarne has convincingly demonstrated to what extent the perception of what is respectful or demeaning treatment, of what constitutes dignity or ignominy is determined by the ‘mental universe’ of a cultural community. He has been repeatedly perplexed to find out just how much French society represents a special case in this field. In his aptly titled book The French Strangeness (L’étrangeté française, 2006) he shows how French culture has, over centuries, formed a severe hypersensitivity for the ‘rank that is attributed to each individual in society’ (p. 85). A sector in which this is particularly visible is the ‘service public’, which is dominated by ‘the logic of honour’, more precisely: ‘a certain nobleness in being at the service of the common good without being enslaved to it’ (p. 124).

It is of course perfectly possible to shake one’s heads – as do most media in Northwestern Europe – about the eternal striking of the French, who simply don’t seem to get the rules of late capitalism. In Britain, there is always someone to observe that ‘what France needs is a Margaret Thatcher’. Meanwhile in Berlin, the political and economic elite condescendingly adds that ‘Germany has done its homework’…

But sorry, that’s simply beside the point. (And might well backfire one day). It makes much more sense to understand France in 2018 as the most fascinating experiment in cultural change, conducted in real time on a national scale. In this perspective, the current convulsions of a part of French society are a perfectly logical backlash against a major cultural disruption that is imposed on them.

The ‘Macron Project’, which, as Simon Kuper recently observed, seems to consist in turning one of Europe’s oldest nations in record time into a kind of ‘Scandinavia with sunshine and vineyards’, is an immeasurable civilizational stress test. In fact, it is astonishing that so many French citizens are indeed willing to complete this kind of demanding ‘homework’.

The open question is: for how long?

The final result of the experiment will depend on their stamina and their level of frustration tolerance. For the time being, the President, whose working capacity, tempo, and rhetoric brilliance in the face of adversity is even respected by the sceptics, seems to keep them on board. Yet, there are good reasons why his nordic-liberal revolution may still fail.

First, as outlined above, the flexibilisation of the labour market, the changes in the educational system, the modernisation of the public service, the transformation of fiscal policy, and the dismantling of corporatist privileges, are more than just reforms. They touch the cultural underpinnings of French society. But where fundamental concepts of honour and dignity are anchored, a violently bent twig – to borrow Isaiah Berlin’s famous metaphor – may spring back and lash out even more violently at the forces that bent it in the first place.

Secondly, Emmanuel Macron is finding himself, slowly but surely, entangled in the defaults and ambiguities of the political system of the Fifth Republic, which he so masterly used to his own purposes during the election campaign. The first-past-the-post system in two rounds provides incredible freedom of design, but it is a treacherous distorting mirror about the real balance of power in society. At the same time, the sheer extent of the power in the hands of the President, and the expectations that come with it, virtually force the Head of State to govern above the heads of a weak parliament, which in turn inevitably leads to the shifting of power struggles to the streets (or rails, for that matter). And the typically French technocratic centralism, cultivated and consolidated over centuries, which Macron’s vertical government embodies, is losing legitimacy by the minute in an age of increasingly horizontal and digital networks.

The so-called ‘pedagogical’ initiative launched by the President over recent weeks – with two long TV interviews on channels watched by ‘target groups’ plus a public debate and even a longer discussion with angry citizens in the street, reveals that he is aware of the dangers. Will his explanations and persuasions be sufficient to calm down the uncertainty triggered by the destabilisation of deep-rooted core values?

France in spring 2018 – the experiment enters its next stage.

This post was initially published in German
by the Berlin-based think-tank Zentrum Liberale Moderne.