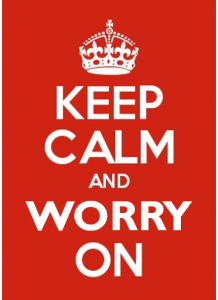 It’s not because the messenger is particularly unpleasant that the message is necessarily wrong. And its not because many of his messages are plain lies, narcissistic bragging or whining paranoia that each and every message is automatically beside the point.

This may be, in an admittedly crude nutshell, one of the main lessons for Europeans in its dealing with Donald Trump. Almost two years into the Trump presidency, the research seminar on the current state of transatlantic relations held on 21 September at the Paris campus of ESSCA School of Management (and which I had the pleasure to attend) was an excellent opportunity to bring together again some of the authors of the excellent special issue on transatlantic relations put together by Anna Dimitrova in spring 2017 for L’Europe en formation, the bilingual quarterly on European Integration and Federalism studies. 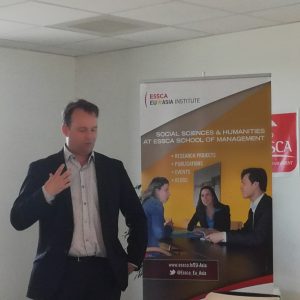 As Kristian L. Nielsen from Copenhagen Business School rightly reminded the audience, ‘Trump is a fact of life’ and Europeans in general (and European political leaders in particular) would be well advised to ‘keep their emotions’. In the field of security and defence policy, for instance, it was under Barack Obama’s presidency that European NATO members committed to reach the 2% of GDP threshold in defence spending. Trump may be wrong in many details about the functioning (and actually the purpose of NATO), but he definitely ‘has a point’ in reminding Europeans that they are currently not assuming their responsibilities.

And fact-checking Jean-Claude Juncker’s argument according to which EU member-states are so much more generous when one includes development and humanitarian aid in the equation reveals the embarrassing truth that the figures don’t quite add up in his sense.

As for Germany – who is certainly not short on money – Angela Merkel’s growing awareness that ‘the times in which we could completely depend on others are, to a certain extent, over’ and that ‘Europeans truly have to take our fate into our own hands’ has so far not been followed by really significant measures to upgrade the Bundeswehr, whose equipment is reportedly in a pitiful state. For Kristian Nielsen, blaming the traditionally pacifist German public opinion or a lack of absorption capacity for inactivity in this field boils down to an increasingly objectionable pretext for not being up to one’s own commitments.

Thomas Hoerber agreed. As he pointed out in his paper, ‘the peace dividend of the 1990’s is no longer there, and the world has become a more dangerous place.’ Trump-style populism, with its high dose of anti-intellectualism, and his utter lack of reliability, does not contribute to making it safer again. Trust, once lost, is not so easy to obtain again. I guess that much will depend on how the US institutions and political class will digest the Trump years (whenever these will be over…).

In the meantime, as Thomas recalled, history shows that the Trump administration’s translation in financial terms of ‘the return of realism in international politics’ – the permanent request for a ‘Return-on-Investment’ – is nothing essentially new: ‘John Foster Dulles, in the 1950s, was even more serious on this point’. What strikes Thomas as new, however, is the rather permanent rhetoric battle against European integration. A very worrying trend indeed – who needs an enemy when you have a best friend like this? 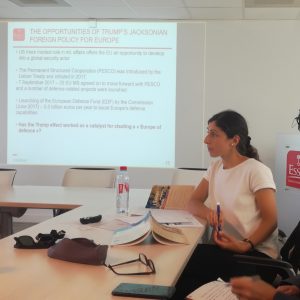 Worrying, but explicable. According to Anna Dimitrova’s meticulous analysis of the four major facets of American foreign policy strategy, Trump’s ‘MAGA’ mantra is not just a baseball cap slogan, but can be understood as a ‘resurgence of Jacksonianism’, a 21st-century update of the seventh president of the United States. Trump’s mix of ‘neo-isolationism-sovereignism-unilateralism-protectionism’ is not all of his own making but strikes a chord in US foreign policy history.

What did I take home from this thought-provoking exchange?

Mainly that now is a moment to keep calm. But also one to worry on. Focusing on transatlantic relation, on how they are currently suffering under Trump and how their deterioration may actually provide a welcome push for Europeans to intensify their cooperation on security and defence issues, turns our eye away from the greatest damage that Trump may be causing in the long run: the harm he is doing, day after day, to democracy itself. By shredding truth to pieces and creating ‘alternative facts’, by turning other powers than the executive into ‘enemies of the people’, by polarising and radicalising a political debate that no longer deserves this name.

Transatlantic relations always had their ups and downs. In the long run, even major disagreements can be fixed, that’s what diplomacy is for. But these relations always have included various forms of cultural transfer, too. It’s in the spill-over of what is currently happening to liberal, pluralistic democracy in the United States that the real reason to worry lies.