There will be a lot of talk about the extreme right’s entry into the Bavarian parliament and the impact of yesterday’s election on the federal government in Berlin. But the most important fall-out may reside in a significant shift in political semantics. 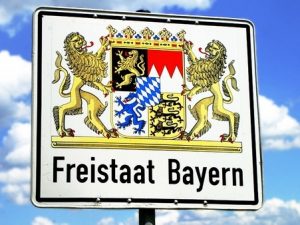 For as long as I can remember, Bavaria has always been described to me as a very particular Bundesland. Not because it was my parents’ favourite holiday destination during my childhood (and has remained, indeed, a blessed corner of Europe), but because the Bavarians insisted on being ‘different’ from the rest of the bunch (to which they generically referred to as ‘Prussians’).

Strictly speaking, it’s not even a Bundesland, since it’s officially called a Freistaat, as if it wanted to remind the others that they could quit the federation any time. Some Germans consider the Bavarians as ‘arrogant’, but that’s the kind of reproach you earn mainly by performing better than anybody else. And they do, in practically all statistics: economy, security, health, education, employment, football, you name it. 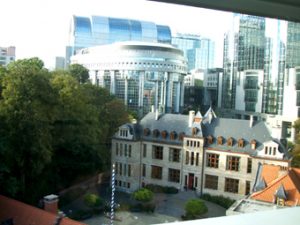 The impressive Bavarian mansion in Brussels.

Even on a European level, it’s difficult not to be impressed with Bavaria. With its 13 million inhabitants it would the 9th biggest member state, and in economic terms, with its GDP of 600 bn Euros, it would even be number seven, before Poland. And they don’t hide their opulence: their wonderfully megalomaniac ‘château’ representation in Brussels, in direct vicinity of the European Parliament, does not go unnoticed.

For as long as I can remember, this model region was managed by the CSU, the powerful local variant of the Christian Democrats, whose hyper-domination of Bavarian politics over half a century was shoulder-shruggingly explained by the fact that the country was ‘deeply conservative’. A very appropriate adjective for a region that not only did have quite a few assets worth ‘conserving’, but that had also managed to reconcile, as pointed out in a famous slogan, ‘laptops and leather trousers’. Developing world-class industry, research, and infrastructures was not mutually exclusive with preserving a strong, surprisingly inclusive, cultural heritage embodied in ostentatious identity markers (including a nightmare dialect).

Yesterday’s election to the regional parliament in Munich has attracted unprecedented international attention. This was mainly due to the fact that the CSU has been identified as the main problem child of the current coalition in Berlin, at least partly responsible for the stalemate in an increasingly ‘ungovernable’ Federal Republic, as well as for the apparent decline in Angela Merkel’s authority. European media are already wondering whether the Bavarian election results will weaken the federal government even further. 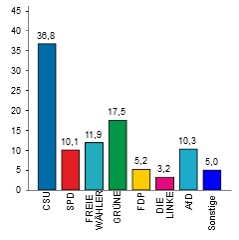 Results as provided by the Bavarian authorities.

And there will be quite some hand-wringing about the extreme right’s entry into the Bavarian Landtag. The AfD went from zero to ten percent – how shocking! Was not Munich the birthplace of Adolf Hitler’s movement? The kind of fear-mongering that shallow international television coverage loves to indulge in. They could just as well point out that 10.2% for an openly xenophobic party with an aggressive single-issue anti-migrant agenda is actually a rather poor result in the very region that has been more exposed than any other to the influx of refugees from the famous ‘Balkan route’ since August 2015. To put it differently: both parties who focused massively on the migration issue were rather unsuccessful in Bavaria. The CSU lost roughly a fourth of their voters in comparison to the 2013 election, and the AfD, which recruited 28% of their electorate precisely from former CSU voters, remained below their score in the federal elections a year ago and way behind current national opinion polls.

In a nutshell: Bavarians proved remarkably resistant to several variants of populism. They rejected the religiously tainted identity populism of current minister-president Markus Söder – whose infamous ‘crucifix law’ backfired even among many Bavarian Catholics – and only a minority of them were ready to embrace the xenophobic and nationalist populism of the AfD. At least that’s my reading, against the very particular backdrop of a soul-searching Germany in the autumn of 2018.

The most intriguing fall-out from this election is, however, the hi-jacking and re-definition of the term ‘conservative’ by the Greens, who doubled their results from five years ago, reaching an all-time high of 17.5%. They managed to do so in proposing a new brand of ‘conservatism’: the one they promote – not unlike their successful neighbours in Baden-Württemberg – shifts the core connotation of the term towards ‘sustainability’. And it carries, mostly implicit, but visibly understood by many, a secondary connotation of urgent change, transposing to their country Tancredo’s famous message to the Prince from Lampedusa’s Leopard: if we want to preserve what made Bavaria a great place, we need to change our ways. 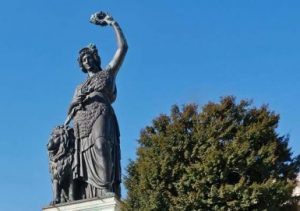 How green has Ms Bavaria become?

Are we witnessing the arrival of climate change and biodiversity worries, in combination with issues of social sustainability, in mainstream politics in Western Europe? It would be about time. It’s probably too early to earmark 14 October 2018 as a ‘potential turning point for Europe’, as Florian Eder suggests in his (always excellent) Brussels Playbook today. In Bavaria, the Greens will remain in opposition, but the fact that they obtained 30% of the vote in the region’s major cities shows that their influence is not likely to decline over the next years. Especially if birds and insects continue to disappear, overhot summers last forever, and the automotive lobby has nothing to offer but big, fat SUVs and threats about job losses.

The future of German politics will be conservative. The question is what people will want to conserve, and who are the politicians who will propose the most credible brand of conservatism.