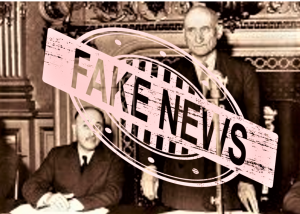 The truth is out: the EU does not exist. It’s a hoax, made up by a vast conspiracy. I have evidence. You can look it up on my Facebook page.

I always believed that the story of a French foreign affairs minister proposing a coal and steel community under a yet-to-be defined supranational high authority (a what?) lacked all credibility.

What I suspected is now revealed to be true: I can finally confirm the Schuman Declaration is fake news. It never took place. Turns out Mister Schuman had well planned to read out his text, based on the draft by Jean Monnet, but he was prevented from doing so in the last minute.

It all started with a tweet by the leader of the ‘National Alliance’, the country’s main opposition party, which revealed what the government had plotted in all secrecy: ‘HOW SCHUMAN THE TRAITOR FOOLS THE PEOPLE – MINERS AND STEELWORKERS SOLD TO THE GERMANS!!!’. It went viral in no time.

Simultaneously, a video was anonymously uploaded on YouTube, a short edited clip showing Jean Monnet in government circles in London, Washington, and Bonn. The pictures were accompanied by a voice-over describing the conspiracy instigated by this ‘citizen of nowhere’ portrayed as ‘lobbyist on the payroll of the global business élites’. Shared by a multitude of Facebook feeds and WhatsApp groups, it accumulated hundreds of thousands of hits in a few days only.

On the news channels and late-night shows, the polemic went wild. Experts, politicians and the usual talking heads came together in rightful indignation about the government’s dangerous initiative. One of the country’s best-known TV pundits shook his head in disbelief: ‘A supranational coal and steel community! They really have lost all sense of reality. Tomorrow they’ll come up with a single market, then they’ll propose open borders, and why not a common currency while we’re at it?’

In the surveys, Mister Schuman’s popularity reached unprecedented lows. The pollsters provided robust evidence of the French public’s growing distrust towards their political leaders, who were about to sell out the French social model and its entire industrial culture.

The final blow was dealt by one the most influential editorialists, for whom this ‘so-called proposition by Mister Schuman’ was nothing short of ‘the ultimate triumph of the ultra-liberalist ideology promoted by unelected technocrats like Mister Monnet’.

Facing spontaneous demonstrations in several cities calling for the immediate resignation of the government, as well as an online petition launched by the ‘France souveraine’ movement and signed by tens of thousands of angry citizens, Robert Schuman finally gave in and cancelled the conference initially scheduled for 9 May 1950.

This is the naked truth, whatever the #FakeNews want us to believe.