The foundation, on 13 January 1980 in Karlsruhe, of a nation-wide ecological party in West Germany came as a surprise. Not the idea itself: the time was ripe for creating a strong political movement based on environmental concerns, frustration with representative democracy, and radically pacifist convictions in the middle of the Cold War arms race. The surprise lied in the fact that this utterly heterogeneous smorgasbord of local protest initiatives and splinter groups, represented by approximately 1000 delegates, managed to get their act together in the first place (albeit under “chaotic” circumstances). 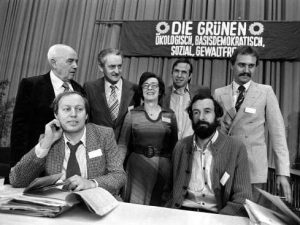 But there it was, and two months later, at the federal congress in Saarbrücken, the party even succeeded in formulating a detailed manifesto of 47 pages proudly called a “Bundesprogramm”. This denomination clearly indicated that the project was to compete in the federal elections, building on the experiences at local and regional polls since 1977.

The German Greens were not the first ecological party to emerge in Europe. In Switzerland, a “popular movement for the environment” had been created as early as 1972, and the UK had seen in 1975 the establishment of the first party bearing the term “ecology” in its very name. Even the hopelessly scattered ecologist groups in France had managed to nominate (rather: persuade) a candidate for the presidential election in 1974, the remarkable René Dumont.

What made “Die Grünen” special right away was their fantastic name. Their founders may have had strong anti-capitalistic convictions, they definitely had an instinct for clever marketing! Turning a colour, which in German culture traditionally stands for the concept of “hope”, into a political brand, was a stroke of genius. So was the unique and unmistakeable “sunflower” emblem. So was dropping any further qualifier, like “party” or “list”. True, foreign media have trouble applying the appropriate declination of this German noun, but the benefits of this spectacular branding success clearly outweigh the grammatical drawbacks. 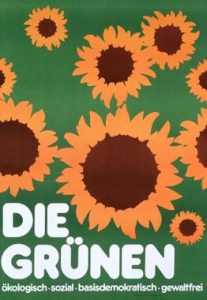 As an eighteen-year-old citizen, about to vote for the first time, I was intrigued. While the Greens were quickly labelled, both by traditional politicians and mainstream media, as “dangerous leftists” and “muesli-crunching eco-nerds”, I had serious doubts about this categorisation, despite the look of most of the delegates. I was also unable to see why putting the fight against the ever more visible and smellable pollution of our industrial environment on top of the agenda should be a bad idea. And what on earth was wrong with eating muesli?

Two years earlier, in summer 1978, I had, by pure chance (probably waiting for some football news), bumped into a television programme of which I still remember the clever alliterative title “Gruhls Grüne Gründung”. The Gruhl in question was no Tolkien creature, but Herbert Gruhl, a well-known conservative MP who quit the Christian-Democrats after a quarter century of membership, reading an open letter to their president, a certain Helmut Kohl, in which he accused him, among other mistakes, of stupidly clinging to the growth dogma of the 1960s.

In my readings I had come across Gruhl’s 1975 book entitled “A planet is being looted – the terrifying balance sheet of our politics”, which introduced me to the Meadows report “The Limits to Growth”. Clearly, this guy was the only member of the CDU who had read and understood it rather than repress the uncomfortable truths it spelt out and buy the latest Mercedes or BMW instead. Most of all, he showed that evidence-based environmental concerns and their inevitable ethical consequences were not intrinsically leftist, but perfectly capable of transcending the political spectrum.

The TV programme in 1978 also informed the audience about Gruhl’s new creation, an ecological party named “Grüne Aktion Zukunft” (“Green Action for the Future”), which sounds like a prequel to Greta Thunberg’s movement, but which was much less successful. Two years later, Herbert Gruhl joined the Greens at their founding congress in Karlsruhe (third from the left on the picture above), but he only stayed one year in the new party, in which he never really felt welcome, and created the Ecological-Democratic Party (ÖDP), which never made it beyond 0.2% of the votes in the federal elections (the ÖDP does hold a seat in the European Parliament, though, obtained with 0.99%!).

The 40 years of the Greens may be interpreted as a success story. Favoured by Germany’s proportional voting system, they managed to disrupt a hermetically closed party system. Opting, after long ideological battles, for a pragmatic rather than a radical approach, they managed to take root in the middle-class electorate (at least in the West). And by being faithful to their convictions, they accumulated a tremendous credibility capital, which is likely to bear fruit in the years to come.

Would Herbert Gruhl, who died in 1993, have imagined that forty years after the foundation of the Greens the CDU would be the junior partner in a government run by a green minister-president in Baden-Württemberg, the land of the automobile? Or that there would be serious talk about the possibility of a green chancellor in Berlin? Probably not.

But the glass can also be seen as half empty. The questioning of the growth dogma may have made its way into mainstream political debate, but the time for practising what is starting to be preached is running out. Herbert Gruhl’s 1988 campaign slogan “Less is more” was utterly unsuccessful at the time. The fact that all those decades later it is more pertinent than ever and that the ÖDP did not even need to update it painfully reveals how difficult it is to subvert capitalist doctrines.