Not many decisions taken by the European Court of Justice make it beyond the nerdish    case law debates relished by our law colleagues at the UACES conference. True, a few directives make the mainstream news headlines, going as far as to impact major votes, just ask Frits Bolkestein. But, certainly, a simple ruling that triggers heated discussions among ordinary people across the entire continent is more the exception than the rule.

One such exception, perhaps the most striking one, is the judgement of case C-415/93, dated 15 December 1995, known as ‘the Bosman ruling’, in recognition of the second-class Belgian footballer who turned European football upside down with the help of very able Liège-based lawyers and the support of the footballers trade union, FIFPro.

For those who care little about football or have lived on another planet for the last quarter century, here’s the story in a nutshell: by taking the Belgian football federation and European football’s governing body (UEFA) to court, Jean-Marc Bosman imposed the application of the free movement of workers within the European Union to professional football players. As a result, a player whose contract had expired could no longer be held hostage by his club under the pretext of transfer fees, a traditional practice in football that the Dutch MEP Van Raay said amounted to ‘slavery’. The court also ruled that quotas limiting the number of foreign players were, when applied to EU citizens, a discrimination against nationals from other member states and therefore to be abolished. 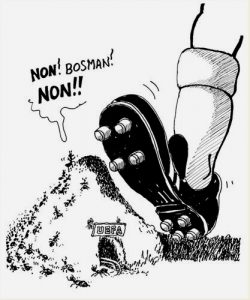 Cartoon by Chenez for L’Equipe, December 1995.

The football governing bodies – UEFA, national federations, leagues, and clubs – immediately adopted a self-victimising discourse, heralding that this would be the end of football as we knew it. UEFA President Johanssen even went so far as to claim, ‘the EU is trying to destroy football’. They shed crocodile tears over the sacred independence of the sport movement and publicly decried the reign of the market in an activity that was not to be considered an economic one.

This was all the more intriguing as all of them had been extremely busy, over the entire first half of the 1990s, turning football into a full-fledged economic activity, increasingly disconnected from its grassroots. It was not Bosman or the EU who initiated the path-breaking Premier League spin-off (1991) and sold its TV rights to BskyB (1992) under dubious circumstances. It was not Bosman and the EU either who launched the UEFA Champions League (does anyone see the irony here?) as a cash machine to maximise revenues for what became a small elite of super-rich clubs (1992). The massive liberalisation process that shook the European football market in the early nineties was already under way when Bosman simply asked to have his rights respected.

What the Bosman ruling did inaugurate was, of course, a new era of player mobility. The end of the quotas for EU nationals led to a quick and massive change in the composition of top-tier teams, especially as virtually all major leagues, while publicly deploring this disconnection from local and regional roots, were remarkably quick to extend – without being forced to do so – the abolition of quotas to players from beyond the borders of EU-15. (Take note, UACES Graduate Forum, there’s a real knowledge gap to fill by qualitative doctoral research on the opaque decision-making in European football bodies of the 1990s!)

The ruling also had a strong impact on the transfer market, both with regard to (skyrocketing) transfer fees for top players still under contract and, inevitably, an extreme concentration of talent in a small handful of top leagues financially privileged by a large television market. The latter effect was particularly felt in France, which found itself the number one purveyor of talent for top clubs in England, Italy, Germany and Spain: while the French squad for Euro1996 counted 18 players playing in their domestic championship, two years later only 9 of 22 World Cup winners were under contract with a French club.

What it did not change was, surprisingly, the intensity of feelings of belonging invested by supporters in their club. As David Ranc has pointed out in his monograph, supporters identify in manifold ways with their club, and contrary to a widespread assumption, the origin of the players who wear the sacred jersey plays a very negligible role. (Yes, we supporters want our team to win, not necessarily sport a line-up of eleven local footballers).

In retrospective, while the Bosman ruling certainly is a ‘landmark’ in the history of European sports, it is exaggerated to call it a ‘revolution’, as mainstream media like to do. In their longitudinal study of football’s migration patterns, Pierre Lanfranchi and Matthew Taylor referred to is as a mere ‘excuse for deregulation’, which ‘added impetus to a trend already in motion’ (Moving with the Ball, Berg, 2001, p. 222).

In political terms, however, it may even be said the Bosman case and the massive debate it provoked among football lovers across the continent (a non-negligible community) had a lasting impact on the perception of sport by European institutions. It raised awareness among policy-makers that sport was “too serious a business to be left to the sportspeople”, to paraphrase Georges Clémenceau’s famous quote about the military. Very quickly, institutions and sport bodies moved ‘from confrontation to cooperation’, and as early as in a “Declaration on Sport” annexed to the Amsterdam Treaty, it was highlighted that European institutions were to ‘to listen to sports associations’. Another sport-related political declaration was annexed to the Nice Treaty.

Later on, sport found its way into the Lisbon Treaty (the famous article 165), and judging by the remarkable selection of sport-related projects now funded by the ERASMUS+ programme year after year, the awareness-raising process in which the Bosman ruling played a major role, is well under way.

Finally, on a more self-interested note, we owe the Bosman ruling that football all of a sudden became a study of the ‘Europeanisation’ strand of academic research, highlighting the relevance of this fascinating multi-dimensional phenomenon of everyday European integration and providing it with a whole new respectability (for which the development of the Sport&EU association provides convincing evidence).

Merci beaucoup, Monsieur Bosman, and happy 25th birthday to the ruling that bears your name! Your action will be gratefully remembered.

France 2022: Why June is more important than April | France 2022: That elusive cohesion | France 2022: Back on the couch | 25 years later, the multifaceted legacy of the Bosman ruling | Forty years of green |