The most emblematic example of how sport is used as an icebreaker in international relations is no doubt the visit, between 10 and 17 April 1971, of nine American table tennis players to the People’s Republic of China, an event known worldwide as ‘ping pong diplomacy’. 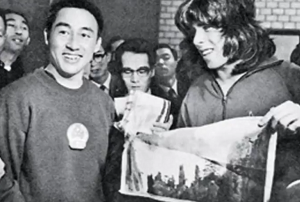 A lot has been said and written about this remarkable initiative that prudently paved the way for the opening on diplomatic relations between the USA and the PRC and allowed to envisage the presidential visit of Richard Nixon, who travelled to China less than a year later.

As Stuart Murray puts it in his 2018 theory of Sports Diplomacy, this landmark case study perfectly illustrates ‘the power of sport to transcend diplomatic estrangement’ (p. 74). He is right: sport can celebrate humanistic values in a highly accessible, immediately understandable message, while keeping ideological divisions below the carpet.

Almost ironically, the fiftieth anniversary of this masterpiece of diplomatic craftsmanship happens to fall into a period of a new ‘diplomatic estrangement’ , unexpected in both its suddenness and intensity, and following a period of three decades of consistent deepening of economic and political ties between China and what must well be called ‘the West’.

The bipolar configuration that seems to emerge has prompted a lot of talk in the media about a new ‘Cold War’, but the metaphor is misleading. If my memory serves me well, there was not the slightest hint at economic interdependence between the two opposing sides at the time when I was stationed as a Bundeswehr Cold War soldier in Bavaria in the early eighties, guarding a forest full of Pershing missiles pointing east. And there was a solid conviction that the West simply was stronger than its ideological opponent, simply because it had universal values of democracy, human rights, or the rule of law on its side.

Today, both on the economic and ideological level, China is setting the agenda. As leading sinologists have shown, China has successfully entered the competition about semantics in an effort to re-define key concepts of politics and diplomacy. As a result, there is no such thing anymore as universal values, but only Western concepts of neo-colonial intent that the rest of world would do well to reject. And as leading economists never tire of reminding us, China will overtake the US as the world’s leading economy (in GDP, at least) by 2030 at the latest.

In 2021, the tensions, the rhetoric, and the susceptibilities on either side are such that the Comprehensive Agreement on Investment, signed in a hurry at the end of the German Council presidency in December (and deemed insufficient in terms of reciprocity, sustainability, and human rights) has good chances of not being ratified. Which in turn would no doubt further deepen the rift.

Could a new sport diplomacy help?

While many in Europe feel it’s time to stand firm and push back the PRC’s current aggressive ‘wolf-warrior’ approach to international relations, there are also good reasons to argue in favour of a pacification of EU/US-China relations. Sooner or later, there will be a need of a face-saving area in which careful rapprochement is imaginable again. I would not be surprised if culture in general, and sport in particular, were floated as non-conflictual communication channels capable of highlighting commonalities rather than antagonisms.

Alas, this time around, sport diplomacy does not seem to be in a position to do its soothing work.

This is paradoxical, since, if anything, it has significantly grown in importance over recent decades. A number of nation-states (including the US, China and EU member states) are implementing full-fledged sport diplomacy strategies in support of their foreign policy objectives.

Even a non-state actor as the European Union has discovered sport’s potential for its external relations since article 165 of the Lisbon Treaty kindly granted it a competence in the field. The ERASMUS+ programme allows to reach neighbouring countries in numerous grassroots projects, involving a flurry of civil society organisations. And under the previous Commission, sport was explicitly added to the “high-level EU-China people-to-people dialogue”, with the aim of reinforcing (much needed) mutual understanding and trust.

At the same time, rather than an icebreaker, sport seems to work like a freezer in relations with the PRC. As episodes likes Mesut Özil’s removal from social media and video games in China or the temporary fallout between the NBA and Chinese television have illustrated, sport has itself become a political minefield.

In Germany, following a wish expressed by Angela Merkel and Xi Jinping, the football association arranged for the Chinese under-20 national team to be integrated into a regular regional championship (comparable to League Two in England), with the aim to help them progress in contact with European football. But the first fixture in November 2017 ended in a diplomatic scandal because of the presence of six peaceful pro-Tibet activists among the four hundred spectators in a Mainz neighbourhood. And since the German FA did not want to apologise for a harmless, spontaneous use of the freedom of expression, the project was stopped.

Instead of calls for a new ping pong diplomacy, what can be heard are calls for boycotting the Winter Olympics in Beijing next February. They are not likely to be followed by any of the national sports delegations, but their very existence and audibility are a good reminder of sport diplomacy’s flip side, where the refusal to engage in sporting encounters becomes a negative diplomatic tool in its own right (as Simon Rofe’s edited volume on Sport and Diplomacy illustrates in several case studies in it’s third part).

The ping pong diplomacy of 1971 deserves to be celebrated as a landmark of China’s long march back into the international diplomatic community. In the 21st century, sport diplomacy, despite being a helpful foreign policy tool in many configurations, will hardly be able to do the trick again in the West’s relations with the PRC.