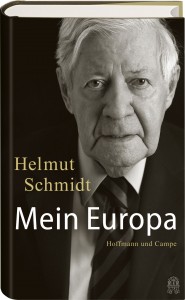 ‘Mein Europa’ – ‘My Europe’ – the book published by Helmut Schmidt only two years ago, was not a new monograph, but a collection of different publications and speeches on European integration. It spans a lifetime – from his very first article about cooperation in a not yet existing community dating from June 1948 to his editorials about the crisis-ridden Union of the 21st century published in Die Zeit.

‘His Europe’ was not a love affair. With the pragmatic realism that the Germans automatically identify with his beloved city Hamburg and therefore refer to as ‘hanseatic’, he often pointed out that there was no need to be a ‘European idealist’. For him it was perfectly sufficient to see just how much it has always been and still is in the ‘strategic interest’ of the Federal Republic of Germany to remain a staunch defender of European integration. He had a deep intellectual and personal admiration for Jean Monnet, and he shared the Frenchman’s belief in the ‘essential rationality of people’. Asked for a wish at the occasion of his 95th anniversary last year, he said ‘My wish is that the Germans understand that the European Union must be completed – rather than putting ourselves above it’.

He also never forgot what the young Federal Republic owed to Europe’s founding fathers: ‘In 1950, the Schuman Plan appeared to me as an undeserved stroke of luck for Germany’, he wrote in his 2008 memoirs entitled ‘Off duty’. While he had, as an anglophile from Northern Germany, much greater cultural affinity with Britain and the English language than with his French neighbours, he never tired of reminding his successors to keep in mind that they should do ‘nothing without France!’ And he cultivated, over almost half a century, a somewhat surprising friendship with Valéry Giscard d’Estaing based on mutual esteem and trust, despite their obvious differences in temper and upbringing. 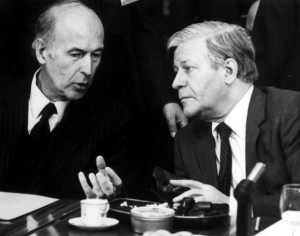 Like his friend, with whom he institutionalised the European Council and introduced the European Monetary System, he was always tempted to criticise the lack of leadership in today’s EU. But he recognised of course that an EEC of nine member states, which had already been sufficiently difficult to manage, was a piece of cake compared to today’s Union of 28. With the freedom of thought of the elder statesman he repeatedly called for a ‘Putsch’ of the European Parliament in order to shake up an institutional framework he considered no longer appropriate.

Helmut Schmidt was the first German chancellor I voted for in 1980. Some of the convictions he represented at that time have been a guidance ever since. The firm belief that the greatest accomplishment of post-war Europe is the welfare state, for instance. Or the will not to put his sharp intelligence in the service of an ideology or party line, but to find strong ethical foundations in a few non-negotiable, fundamental values: ‘freedom’, ‘justice’ and ‘solidarity’, as he summed them up in his own lexical update of the French revolution’s legacy.

It is a sad coincidence that Helmut Schmidt, a lifelong friend of Britain and promotor of the UK’s role in the European Union, passed away on the same day when the British prime minister defiantly throws his four-point letter on the table. At the same time there is also some ironical comfort in the fact that Cameron’s letter and speech were entirely eclipsed in the German news by the memories of a great statesman. It’s a good lesson: the ones you remember fondly are those who stand up and defend their beliefs in adversity, those who contribute to daring undertakings rather than sulk in their corner. One of my favourites quotes in class when I speak about the creation of the European Union is the one from Shakespeare’s Julius Cesar with which Helmut Schmidt concluded his elegant speech at the Labour conference of November 1974 in Brighton:

There is a tide in the affairs of men,
Which taken at the flood, leads on to fortune ;
Omitted, all the voyage of their life
Is bound in shallows and in miseries.
On such a full tide are we now afloat,
And we must take the current when it serves,
Or lose our ventures.

His Europe was one that took the current when it served, rather than losing its ventures.