This is the second of two blogposts on Valéry Giscard d’Estaing.
The first one is available here. 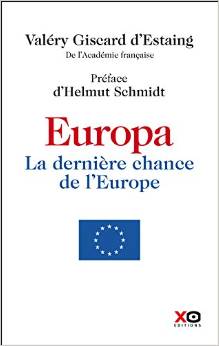 Only 6 cents the word!

Ten years after the premature death of his constitutional treaty, Valéry Giscard d’Estaing, now aged 89, is still an undiscouraged believer in the European project. Concerned by the current crisis of the European Union, he proposes in a recent book a project names ‘Europa’, which an inspired plume – himself or the publisher? – felt the need to subtitle ‘Europe’s last chance’.

The utter cliché of this subtitle notwithstanding – after all, even Jean-Claude Juncker thought it was necessary to dramatize his mandate at the helm of the Commission with the same words – an essay by Giscard always deserves a look. He certainly has a record of European leadership that spans from the 1970s, when he was a driver of both enlargement – paving the way for Greece, Spain, and Portugal – and deepening of the community, through the creation of the European Monetary System (EMS).

It turns out that only one third of this already very thin book (184 pages printed in very large font, hardly more than 30,000 words sold at € 16.90, which makes roughly 6 cents the word) is actually dedicated to the ‘Europa’ project that gave the publication its title. The rest is a kind of recapitulative short-cut of how the EU got where it is today. Apart from some nice anecdotes – like the moment in Bremen in 1978 when he invented an English name for the forthcoming ‘European currency unit’ with the aim of producing an acronym that would recall a French medieval currency – there is strictly speaking no added value in these fireside souvenirs.

The ‘Europa’ project’ itself is, in a nutshell, yet another draft for a two-speed Europe, with a core of 12 in a Union of 28. The core would naturally work towards fiscal harmonisation by 2030, backed up by a European treasury (issuing Eurobonds) and based on a principle of redistributive solidarity. Note that Giscard does not anticipate any major popular resistance to fiscal union – on the contrary, he expects it to be very well received by the European people – and he foresees harmonisation of retirement age in the long run.

‘Europa’ would be run by a ‘directoire’ (in parallel to the EU and Eurozone institutions). For reasons of democratic legitimacy it would also convene a ‘Congress of the people’ composed of MEPs and national MPs. The tone of the proposal is itself very ‘directoire’-like, especially when it comes to identify the eligible members of the future core-Europa: ‘The participation of Ireland and Finland may also be envisaged’. Good to know! Envisaged by whom? Under what conditions? Would they even be asked?

The book is rife with self-congratulation: oh, the days when Helmut Schmidt and himself created and managed the European Council! Of course, their successors at the heads of today’s European governments entirely lack the necessary leadership qualities and the indispensible vision (he does not mention that his friend Helmut, who wrote the preface to the book, used to advise each politician with ‘visions’ to go and consult an ophthalmologist).

The author also has a strong tendency to over-simplify things (despite, obviously, better knowledge). Three examples: 1) Needless to say that Chirac and only Chirac is to blame for the French ‘no’ vote to the constitutional treaty in May 2005. 2) The resurgence of national identities is mainly due to the scapegoating of Brussels by the current generation of European politicians. 3) if Europe is perceived as ‘the sick man of the planet’, the main reason is ‘permanent Euro-bashing by the Anglo-Saxon press’.

It saddens me to write this, but reading this project is an experience that comes close to marking an undergraduate term paper while not being able to suppress some deep sighs. Had I to mark this text, what would I be supposed to put in the margin of sentences like: ‘Thus the project of Robert Schuman was approved by six states, more or less from the Holy Roman Empire. These were the founding countries. They have remained so until today.’

Unlike the average undergraduate student, however, Giscard is touring schools and media with his term paper, as if there was any serious chance of seeing his project only even discussed by any current European leader. He has also set up a website, as thin as the book itself, which even in the core-Europa of twelve, only Francophone readers will be able to consult (perhaps that’s because he is, as he proudly recalls on the front page, a member of the Académie Française). If you do happen to be among these, you can consult or download the book for free (click here).

This post should by no means be understood as cheap scorn or mockery. Valéry Giscard d’Estaing has great merits both for European integration and for modernising the French Republic without being prisoner to ideological dogma (some of his reforms were more leftist and lasting than Mitterrand’s!). And his advocacy in favour of European integration is sincere and wholehearted. One untimely, uninspired, and unnecessary book will not change this record.