After being busy getting elected in May 2017, Emmanuel Macron used the traditionel French ‘Bridges of May‘ in 2018 to take a trip to Aachen in order to accept the so-called ‘Charlemagne Prize’ that the city bestows each year on a prominent individual ‘for work done in the service of European unification’.

Some might argue that Macron has actually not yet had the time to do much for European integration, but it seems that in the troublesome period we are currently going through, winning an election with a distinctly pro-European agenda  already qualifies. 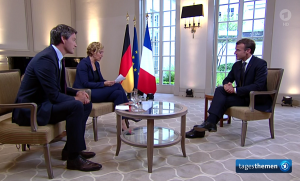 Macron interviewed (in French!) by Tagesthemen.

For Macron the trip was an opportunity to hammer some messages home to his German audience in the largest sense. And he seized it in his typical manner: not only in his acceptance speech – broadcast live, then quoted and commented upon by the entire media spectrum – but also in a television interview for the renowned evening news show ‘Tagesthemen’. And, of course, in a friendly meeting with the crowd at a street festival in the city centre, and a more focused visit to the (reputed) University to meet and exchange with students.

But since his visit coincided with the first anniversary of his coming to office, it was also an occasion for the Germans to take stock of his first year in the Elysée. For instance, the prime-time geopolitical TV magazine ‘Weltspiegel’ dedicated an entire (well-balanced) special issue of 45 minutes to the French citizens’ perception of their new President.

As Voltaire’s Professor Pangloss would have concluded, everything was fine ‘in the best of all possible worlds’. There are still some TV journalists around who do high-quality work and have an international mindset – how many of the Parisian know-all pundits would have been able to interview Angela Merkel in German? Just asking. And the ease with which Macron adapts to different settings and interlocutors without reducing the quality of his spoken language remains amazing. Add to this the tangible sincerity of Franco-German friendship that can be felt on such occasions among all audiences, and you have a perfect little spring break.

And yet, even though Macron himself seems to be appreciated by the Germans (including Mrs Merkel), despite his very frank messages about the need to stop procrastinating and clinging to budgetary ‘fetishism’ at a historical moment of European integration, there is a strange atmosphere in Germany these days, as if the new government was paralysed under a lead blanket.

True, quite a few quality media acclaim the European plans of this both ‘uncomfortable and praiseworthy’ friend. But this does not really come as a surprise: rather than being populated by the losers of globalisation and European integration, these editorial offices are staffed with enlightened liberals, who would have massively voted for Macron if only the German political system allowed for the emergence of such a Maverick.

And now – surprise, surprise! – the Chancellor has gone so far as to formulate a prudent response to Macron in a Sunday paper interview. It is unclear, however, whether her proposals are simply politely put red lines disguised as constructive compromises, or pseudo-offers that she expects to be diluted anyway in the domestic and European debate. Perhaps she simply wants to recover leadership on the domestic debate again, after the publication last week, in the same newspaper, of a manifesto against the deepening of monetary union signed by 154 professors of economics (whose predictions are, as we all know, always right on target).

Overall, the political class seems to be well in line with the professors and responds with a wall of silence. They listen politely to what Macron has to say about their ‘taboo on financial transfers’ and their lack of will and capacity ‘to project themselves’ towards a common future, ‘like our founding fathers were capable of doing’, but it’s evident they don’t hear a word. At the same time, they are forced to recognise that Macron’s domestic reforms robs them of their good old pretext of sending the French back to their own failings and request they ‘do their homework’.

Their attitude was summed up recently by Daniel Cohn-Bendit, who diagnosed a flagrant ‘intellectual laziness in Germany that blocks them from addressing Macron’s proposals’.

It might be even more appropriate to quote Bob Dylan, according to whom ‘we live in a political world, where courage is a thing of the past.’ In GroKo Germany this definitely seems to be the case. The political élite, is not only ‘slumped on the sofa of complacency’ (Timothy Garton Ash in The Guardian), but actually afraid of the electorate that renewed their mandate. They cannot imagine that the public would be ready to accept the simple truth that Germany has been and still is the biggest beneficiary of the monetary union and the single market altogether. Some of them may realise that it’s about time this truth is spoken out – and some of them, once out of office like Sigmar Gabriel, actually say it out loud – but they all know it is utterly incompatible with the traditional home-grown narrative of Germany as Europe’s ‘cash cow’. And they are convinced it would provide the AfD with even more momentum.

And it is deeply dishonest, after having published a solemn coalition agreement that starts with the very commitment to ‘A new awakening for Europe’. I would be glad to be told wrong by a sudden ‘new awakening’ in German politics, but for the time being, this is nothing short of hypocrisy.

The only encouraging variable in this strange configuration is that the German political class, after having successively dealt with Chirac, Sarkozy and Hollande, totally underestimate Macron’s capacity of opposing them with a rare mix of compelling intellectual persuasiveness and pig-headed obstinacy. Remember my football metaphor of Gegenpressing !

Macron may be imbued with his own brilliance and so much convinced by his own ideas that it borders on arrogance. But his character is a glimpse of hope for Europe.