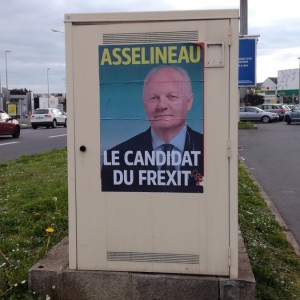 Angers, April 2017: the first time ever that the term ‘Frexit’ appears on a campaign poster.

Why do they do it? Just for four precious weeks of fame? For seeing their faces on billboards and being invited to Parisian television studios? For walking into the polling station on election day and finding their names printed on the ballots in the same font and size as the big political celebrities? For fulfilling their divine mission of disseminating conspiracy theories or Trotskyite axioms to the widest possible public? Or simply for saving democratic pluralism?

One of the many flaws of the Fifth Republic is the encouragement it gives to fringe candidates to go for the famous 500 signatures of endorsement by elected representatives and enjoy the limelight of the most glamourous of political theatres. Since Saturday, 11h30, we now know there will be eleven aspirants for the French throne. Does French democracy really need an entire football squad line-up in order to choose one captain? Could it be that there is something wrong with the captain’s role and attributes in the first place?

Sarcasm comes easy when referring to the incredibly stubborn Nathalie Arthaud, François Asselineau, Jacques Cheminade, Jean Lassalle, and Philippe Poutou. None of these so-called ‘petits candidats’ is likely to reach a score that with a figure before the comma. Still, they managed to obtain their 500+ endorsements from whoever wanted to sponsor them among the members of the departmental and regional councils, MPs and Senators, MEPs and, of course, an entire army of mayors. Of the latter category France boasts 35,416 representatives, many of whom are ‘sans etiquette’, i.e. without any link of obedience to a party, and only too happy to tell the big parties – ‘those Parisians who couldn’t care less for us rurals and all of a sudden remember us every five years’ – where to stick their sponsorship form.

As a result, those who wanted to limit the number by making things more complicated in fixing additional thresholds – the signatures need to come from thirty different départements, with a maximum of 10% from any single département – or in deciding to publish each individual sponsorship signature online, have utterly failed in their dissuasive intention.

De Gaulle, the inventor of the presidential election ‘padlock’, didn’t mind the fringe candidates. To him, they were folkloric cannon fodder. Each additional freak candidate added to his own aura of towering above the mortals and took away attention from the few serious rivals (like the centrist Jean Lecanuet who took blasphemy so far as to gnaw away 15% the votes in the first round of 1965, forcing de Gaulle – who had ‘only’ obtained 44.65% – to fall as low as to campaign in a second round against Mitterrand).

From the beginning, the first round of the presidential election was more than it was intended to be. In a country where proportional representation is ruled out in all national elections – sacrificing legitimacy on the altar of stability – the first round is the only moment where minority opinions can not only enjoy massive public exposure and enter a competition that is less biased by strategic voting, but also benefit, over the last fortnight of the campaign, from absolute equality in media coverage.

Needless to say television does not like the ‘petits candidats’. They spoil the drama, diluting the showdown effect that television adores. This is probably the reason why TF1 organises the first TV debate as early as this Monday, 20 March, before the equality requirement can be enforced. It allows them to stage a ‘Big-5’ debate excluding the other six candidates – a bit like the Champions League quarter finals. Nicolas Dupont-Aignan – the faithful preacher of the true Gaullist gospel with a potential of 3 to 4 percent of the vote – who complained about his non-invitation, was debunked last week by the Conseil d’Etat, which stated that at this stage of the campaign the non-invitation ‘is not in itself characteristic of an unfair treatment’ and can be compensated by an individual interview on TF1’s main evening news, given the relative representative weight of this candidate. In response, the excluded candidates have now decided to stage an alternative debate, just before the TF1 event, cleverly organised by the new pure player Explicite and streamed on Facebook Live. 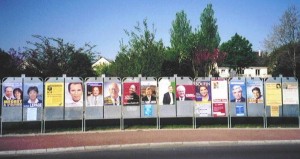 Beyond this polemic, the most important question is of course whether the small candidates have an impact or not on the competition for the first two places. There is a widely held belief – for which it was impossible to provide undisputable evidence – that the almost ridiculous record number of sixteen (!) candidates in 2002 contributed to eliminating Lionel Jospin and allowing Jean-Marie Le Pen to accede to the second round face-off. It is true that with three Trotskyites, two ecologists, one communist and one representative of the ‘Gauche radicale’, the space on the left was rather crowded. Quite a few of the Socialist sympathisers took the seemingly risk-free opportunity of the first round to ‘teach Jospin a lesson’ for not having been leftist enough during the five years of his (actually highly successful) PM mandate in cohabitation with a paralysed and almost side-lined Jacques Chirac.

This time around, they will not have the same problems. Fifteen years ago they thought there wa 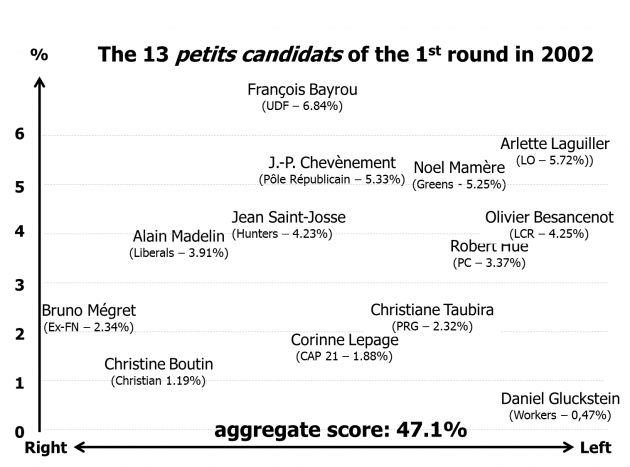 s no risk of NOT seeing the Socialist candidate in the second round. Now they will have to think about what right-wing or centrist candidate they give more chances to defeat the Le Pen daughter. Speak about social and political change.

For the small candidates this is bad news. For many voters, the stakes are too high this time to waste ballots, even in the first round. Some argue that in the ‘anti-system’ rhetoric they have in common they contribute to undermine the French political system. But the system does not need them to undermine itself very efficiently. If their mere presence on all the billboards in all the 35,416 communes makes some more voters realise that something’s intrinsically wrong with the presidential election, they will have rendered a good service to French democracy.

This is post # 14 on the French 2017 election marathon.
All previous posts can be found here.