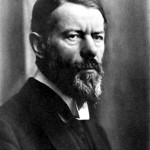 It’s time to take your good old Max Weber out of the shelf again. His definitions of sources of authority are as pertinent as they have ever been. What did he write about ‘charisma’ again? ‘The exemplary character of an individual person’, ‘endowed with specifically exceptional qualities’, and by whom ‘new normative patterns are revealed’ to his/her ‘recognisers’.

In a country whose citizens are completely exhausted by what I dubbed already last autumn the ‘election marathon’, Emmanuel Macron’s charisma and promise of renewal has been the only unbroken mobilising force that made people walk to the polling stations yesterday. More than half of them decided it was no longer worth it. Even the reliable old rule according to which high abstention invariably benefits the extremes is made obsolete by En marche!

It was the Fifth Republic’s logic in full splendour: charismatic authority precedes what Weber named ‘rational-legal authority’. The only election that really counts is the excessively personalised choice of the new President, who is then bestowed with a parliament whose only reason of being seems to be the docile confirmation of the new monarch’s wishes. The one sentence that was to be heard across the entire country over the last five weeks was a compliant ‘We need to give the new president a majority’ or, in its simpler version: ‘Give him a chance’. Which, subliminally, corresponds almost to an anxious ‘Give ourselves a (last) chance’. 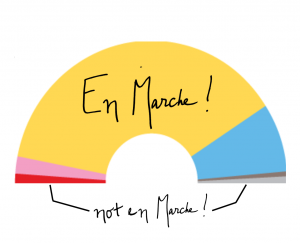 It’s ‘de Gaulle 2.0’ or ‘1958 reloaded’! Made possible by the 2001 calendar reform that changed the sequence of votes, placing the legislative elections in mid-June, one month after the presidential vote. The original intention had been to avoid systematic dissolutions of parliament (like the ones decided by Mitterrand in 1981 and 1988). But the Macron effect boils down to the dissolution of the entire party spectrum!

At first sight, the month between the entry of the new President and the first round of the legislative elections does not seem a long time. But that is to underestimate the sheer awe that follows the enthronement of the new monarch. While the time is too short for messing anything up or making major strategic mistakes, there is more than enough time to take a firm grip on the symbolic attributes of power, dress up in the gown of greatness at international summits, set up a promising new team that gets to work, launch first reforms and announce an agenda. In other words: simply act as if the follow-up elections were a pure formality and treat all other parties as if they already were ‘the opposition’.

As a result, the very same party leaders who had been serious contenders for supreme reign just a few weeks ago, are reduced to humbly asking citizens ‘not to give the President too much power’. Not exactly the most mobilising campaign manifesto. And a counter-productive one with that, especially when uttered by those who over the two previous mandates precisely had ‘too much power’ and did nothing substantial with it.

Those among the French who found the energy to overcome election fatigue and actually went to vote yesterday have decided that Emmanuel Macron was to have as much power as possible. In each single one of the seven districts of our nicely mainstream Western Département of Maine-et-Loire, the En marche! candidate finished first and will no doubt end up elected next Sunday. The large majority of them totally unknown some weeks ago: a retired senior emergency nurse, a 35-year old female infantry officer, a 36-year old mechanics engineer, to name but three examples of all those newcomers who never had run an election campaign in their lives. They all benefited from the Charisma bonus.

The joyful Macron revolution, staged in strange simultaneousness to the UK’s sad self-demolition, raises some not so joyful questions. Is that then what we are left with in our 2017 late modernity: does the functioning of democracy really depend on the emergence of a charismatic leader who surfs on his ‘specifically exceptional qualities’, as Weber had it, and obtains full rational-legal authority in the wake of his surge? Does it really all depend on leadership or the absence of it? On the (quite accidental) availability of outstanding talent and human resources? On good luck?

Emmanuel Macron and his government will be very closely observed for the manner in which they will push their labour market reform against the opposition that is likely to form in the streets rather than in Parliament; they will be tested on their credibility when it comes to the new political ethics they promised; they will be scrutinised by their peers on the European scene. What I am most curious to see, however, is whether he will keep his promise to reform the electoral code and introduce proportional voting against the deeply engrained French aversion to governmental instability and coalition building. Reforming, for the sake of just representation of political minorities (including unpleasant extremes), the very system that provided him with an unprecedented majority – now that would, in Weberian phrasing, certainly ‘reveal new normative patterns’ in French politics. And a new and different kind of charisma.

This is post # 24 on the French 2017 election marathon.
All previous posts can be found here.