One year after the disastrous TV debate, where does the Front National stand in spring 2018? 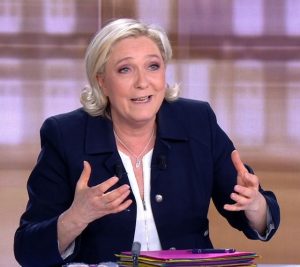 One year ago, on 3 May 2017, I watched the final debate between the two remaining candidates for French presidency. It turned out to be the most curious ‘Surreality TV show’ ever on French television. It was almost as if Marine Le Pen had entered the studio with the firm intention to reveal to the eyes of the nation that she was utterly incompetent on economic matters, embarrassingly overstrained on the intellectual level, and blatantly unsuited for any higher public office.

In spring 2018 she is still there, re-elected at the helm of the Front National at its national congress in March, imposing the party’s rebranding through a controversial name change, and organising a rather lacklustre May Day celebration in Nice this week, to which she had invited colleagues from the European Parliament’s ‘Europe of Nations and Freedom’ group.

The simple fact that a party that reached its best result ever – a spectacular 7.6 million voters in the first round of the presidential elections – feels to be in need of a re-boot is due to the dramatic structure of the 2017 French campaign. What would you do with a football manager who leads his team to the final and, just before the ultimate triumph, gets everything wrong in the decisive match? Exactly. It is therefore hardly surprising that Marine Le Pen’s authority and leadership qualities, according to several polls (see here or here) are contested even within the FN’s own ranks. Above all, it’s the TV debate of 3 May that still hurts.

Their doubts notwithstanding, members are expected to confirm the proposed re-branding to ‘Rassemblement national’, whatever the discredit of this name by those who used it in the past. The political connotation of the term ‘rassemblement’ – literally ‘rally’ or ‘gathering’, but in this context probably best translated by ‘alliance’ or even ‘union’ – is the coming together of different people under one roof. It thus subliminally signals an opening towards potential coalition partners on the right, and a recognition that given the French electoral system, it seems out of reach for the party to access power on its own.

There is a ‘déjà vu’ in this approach to woo willing renegades from the so-called moderate right in order to become acceptable as coalition partner. Whoever knows the history of the Front National, founded in 1972 by Jean-Marie Le Pen, is reminded of 1998, when the proportional system of the regional elections turned the FN into the kingmaker in five regions, where conservative candidates, contrary to all their previous promises to resist temptation, were crowned president of their respective Conseil Régional with the votes of the FN representatives.

For what was then called RPR and UDF, and is now known as Les Républicains, this incident remains an original sin that has never been expiated. Their new leader, Laurent Wauquiez, visibly pursues the opposite strategy: he hopes to undermine the Front National by appropriating its topics, tone, and vocabulary. The same tactics that Sarkozy already played around with under the guidance of his own Steven Bannon, a grey eminence in the Elysée named Patrick Buisson, only to get his fingers burnt. 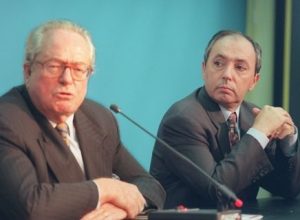 And a second ‘déjà vu’ is already looming: the defection of key members and the launch of spin-offs that might develop into splinter parties of their own. The first time this happened to the FN was precisely in the wake of the 1998 regional elections, when the party’s number two Bruno Mégret fell out with Jean-Marie Le Pen on the latter’s refusal to enter coalitions and repetitive use of anti-Semitic provocations. Mégret founded the so-called Mouvement National Républicain (MNR) and obtained 2.34% of the votes in the 2002 presidential elections. He never managed, though, to establish the MNR as a viable alternative to the FN, and his only success was to install his wife as mayor of a provincial city near Marseille.

Today, Marine Le Pen is under a similar scission threat. At the March congress, she managed to rally party members behind her with her well-tested anger rhetoric, but prior to the event she had to deplore the departure of some relatively prominent party members. Among them, the FN’s previous number two, Florian Philippot, to whom she owes much of the success of what is called in France ‘the de-diabolisation process’ of the Front National, and who has now launched his own spin-off Les Patriotes.

Philippot, who has been an MEP since 2014, does of course not have the infrastructural and financial resources to set up a full-fledged competitive party in no time. But Le Pen would be well advised not to underestimate him. Contrary to herself, Philippot, a graduate of the ENA just like Macron and Wauquiez, possesses economic expertise. He is a representative of the ‘social’ wing of the nationalists, for whom leaving the European Union is the cornerstone for their entire programme of radical change in France. And while Le Pen was destabilised by the unwavering support of the Euro by public opinion and changed her line on the common currency in a totally unconvincing manner, Philippot has remained true to his ideas (and is due to publishing a book named Frexit). On long-distance runs, consistency may well turn out to be a major asset! When questioned about the current state of his splinter party, he refers to … UKIP, ‘who also began as a very small movement!‘

The current leadership woes notwithstanding, it would be a mistake to attest the FN a diminished mobilisation potential. It still has three trump cards in its sleeves:

First, on the political spectrum, the removal of the traditional reference points ‘left’ vs. ‘right’ – presumably pushed by Macron’s steamroller towards the landfill of history – also benefits the nationalists. All of a sudden, it becomes credible to reject the ‘extreme-right’ label as no longer relevant and to position oneself beyond old party lines as the sole defender of blood, soil, and identity, against the unpatriotic servants of globalisation. The latter, embodied of course by Macron and the European Commission, are despicable representatives of what Le Pen now systematically refers to as ‘nomadism’. 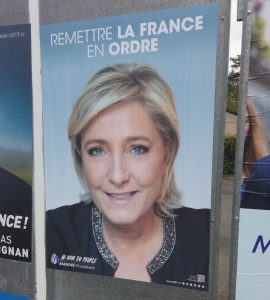 Secondly, the Front National still has a personality with high leadership potential in reserve: Marion Maréchal-Le Pen, Marine’s niece, currently ‘in retreat from political life’, is considered the greatest hope for the party’s future by many members. The time of the 29-year-old figurehead of the FN’s ‘identitarian wing’ will come, and she has the potential to become a charismatic leader, with the ability to make the party an alternative beyond the core of traditional voters.

Thirdly, there is no reason to believe that the background noise of cultural pessimism that feeds French nationalism will fade away any time soon. Macron’s astonishing aura of optimism may well attenuate globalisation fears, but it will not be able to delete key issues like migration, Islam and security from the agenda. Moreover, given Macron’s personality and style, the remaining years of his mandate will inevitably fuel latent attitudes like anti-elitism and anti-intellectualism in a significant part of society. And his policies are not likely to reduce the gap in self-perception between the dynamic regional hubs and the rural and small-town periphery.

French nationalist populism under Marine Le Pen may currently experience a little slump. But as Jean-François Sirinelli summed up 20 years ago in his cultural history of the 20th century, every period of relative weakness was followed by a new strengthening, each time ‘when the ferments of destabilisation were at work: a persisting stagnation of the economy, social tensions resulting from it, and an increasingly gnawing doubt about liberal democracy.’ [1]

The success of the Macron presidency will not least be measured on his capacity of lastingly defusing such ‘pathogenic situations’ (Sirinelli), during which a not insignificant part of French society becomes prone to identity fears of all sorts.

This post was also published in German
by the Berlin-based think-tank Zentrum Liberale Moderne.