An excellent promotional slogan, underpinned by an emotional video of suffering and celebrating the numerous downs and spectacular ups of the blue-clad heroes over the decades.

But at the same time, an involuntarily poignant and, for that matter, rhetorical question, to which the only honest spontaneous answer would have to be “Not much, I’m afraid!”

What exactly holds France together, has become a question that is increasingly awkward to answer. For some, it’s already too late to ask the question.

In a widely remarked book published in 2019, Jérôme Fourquet, one of France’s leading pollsters at IFOP, coined the term “archipelisation” for the steady, massive undoing of social homogeneity and national cohesion he observed. The reality he describes (further refined, and clearly improved in a more recent book named “The France beneath our Eyes”, which will be worth a post of its own) is dominated by a rampant, seemingly unstoppable heterogenization of lifestyles and fragmentation into micro-belongings.

During overheated election campaigns, many candidates are tempted to play the nationalism card and solemnly swear to defend “French identity”. Why not, it’s one of the most reliable knee-jerks in human history. But it might deliver much less than it used to: nation-building has become a difficult business in the 21st century. While the imprint of the long, all-encompassing, and successful homogenisation effort of the Third Republic (1870-1940) is still tangible all over the territory, seven post-war decades of capitalist consumer society seem to have hollowed out the collective narratives and replaced it by individual pursuits of happiness entirely focused on the inner circles of private life.

Of course, there are regular moments of high patriotic emotions, and TF1 may be right, nobody does them better than Les Bleus. But, as I have written elsewhere some time ago already, national football glory is like a short, pleasantly warm shower in archaic community feelings, before moving apart again and returning to our postmodern, separate lives. 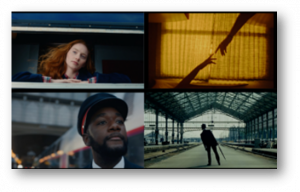 This is the baseline introduced last summer by SNCF, a company that carries the adjective “national” in its name. Celebrating the 40th anniversary of the TGV, they published a truly moving videoclip on what it means to be French. Based on the iconic four-note SNCF jingle that precedes train station announcements all over the country (a great inspiration to David Gilmour!), it gives to hear a slam of 92 seconds, performed by renowned songwriter (and prize-winning novelist) Gaël Faye. While the lyrics play with all possible French stereotypes, the screen is filled with a multitude of well chosen pictures illustrating the social mission of the national railroad. In the SNCF’s own words, the video is meant to “pay homage to our national character and celebrate the diversity of French society”.

The clip is by no means ridiculous. Quite the contrary: it is touching and funny, and it still puts a smile on my face after I don’t know how many viewings (I used it in class). And the writing is really good: the final lines “We’re not of bad faith, just a bit paradoxical. We’re not square. We’re hexagonal” are brilliant.

But it’s of course incorrect: if the TGV was for “all of us”, it would be known by now. There would have been no need to introduce in 2015 what is referred to as the “Macron coaches”, intercity road links that contrary to the TGV are affordable to everybody.

And it’s bittersweet. The “we” it refers to throughout is very elusive, and the traditional clichés and stereotypes it cleverly plays around with are exactly that: traditional. There is a hint of melancholy hanging over the lyrics and the pictures. Like a subtext asking, “What if our imagined community is just an illusion?”.

This was the cover title of Libération on Monday 12 January 2015, one day after four million citizens gathered in the city centres all across the country in order to pay tribute to Charlie Hebdo and freedom of speech.

These were indeed memorable, intense, and precious moments of togetherness, but any lucid eyewitness could not help being uncomfortable with the newspaper headline. Simply because it was plain to see that the crowd had been, well, white. The notable absence of visible ethnic minorities among the French population, especially of Muslim faith, was (credibly) explained over the following days by understandable fears of abuse by some racists among the crowd, but also by a good deal of self-censorship (“I’d love to be solidary, but would I be at all welcome?”), which is even worse. If “we are a people”, we don’t seem to be an inclusive one, do we? 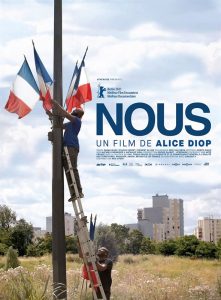 I was the not the only one to be bewildered by the composition of the crowd. It motivated Filmmaker Alice Diop, born in the Parisian suburbs to Senegalese parents, to dig deeper and undertake a journey along the “B” line of the RER Parisian transport network, which cuts across the metropolitan area over 80 km from the affluent south-west (Yvelines) to Charles de Gaulle airport in the north-east, serving quite a few historically loaden spots (Saint-Denis Cathedral, the Drancy internment camp with its Shoah memorial) but also inflammable contemporary suburbs.

“We” (“Nous”) is the title of the two-hour documentary (first broadcast by ARTE before cinema release in February 2022) based on her patient observation of the very different individuals she meets on her way (including members of her own family). She could have added a question mark. As the Berlinale rightly pointed out, this strange mosaic clearly suggests that “divisions haunt France’s present”, but at the same time, the door’s not closed on a potential, inclusive “We”.

Emmanuel Macron is keenly aware of the disintegration tendencies that work on the national body. During the “Great National Debate” in 2019, when he toured the entire country to exchange with local politicians and citizens in discussions that could last for several hours, he had an opportunity to collect first-hand impressions about the multifaceted perspectives (and often contradictory demands) of a country torn between distrust towards all things “national” and the wish to remain a “community of citizens”, as sociologist Dominique Schnapper called the “modern idea of nationality” in an inspiring book back in 1994. 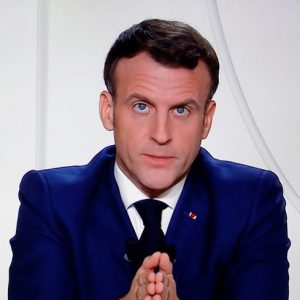 Since the outbreak of the COVID-19-pandemic Macron has addressed the nation on television twelve times since March 2020 (with remarkable audience shares, quite like Les Bleus !). Each time, he concluded by appealing to the cohesion and solidarity of his “dear compatriots”, sometimes expressing his appreciation of a collective behaviour – “We have been solidary like never before!” – that many viewers would no doubt categorise as wishful thinking rather than taking stock. “We’ll keep on standing, united and determined.” – “I have faith in you for remaining united, serene, and determined.” – “Let’s gather around our values, our history, the attachment to our democracy.” To many ears, even the simple “Let’s remain united!” sounds somewhat false, since it implicitly claims that there is already a unity which only needs to be preserved.

For the citizens (like me) who listened to all of these speeches, it was difficult not to detect a kind of desperate incantation of a virtue long lost. Very much in line with the President’s tendency to exploit in solemn consensual tributes the passing of well-known public personalities, from conservative intellectual Jean D’Ormesson to the feminist lawyer Gisèle Halimi, from rock’n’roll hero Johnny Hallyday to cinema legend Jean-Paul Belmondo. Every occasion to remind the French of shared memories is most welcome.

Emmanuel Macron is well placed to know that the country he has inherited in 2017 is even more fragile, worried, and confused in 2022. There have been months of yellow jackets protests, an aggressive railroad strike, a string of terrorist attacks and the murder of Samuel Paty, a burning Notre Dame and a handful of natural disasters, a breathless Great National Debate and an innovative Citizens Convention by sortition, as well as almost simultaneous painful societal reckonings: with systematic racism, with police violence, with so many feminicides in so many places, with so many cases of paedophilia in the Catholic church and elsewhere – which society would not be deeply destabilised by the sheer accumulation of such phenomena within a few years only? 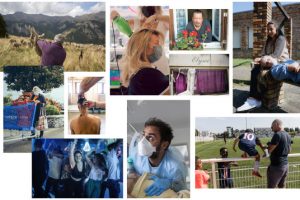 It’s a sensitive, but highly appropriate moment to take stock of what composes French society today and what might still hold it together. Which is exactly what Le Monde has set out to achieve last autumn in a wonderful illustration of high-quality journalism at its best. A hundred of its journalists, each accompanied by a photographer, travelled across the country and brought back a hundred long reads from an overwhelming diversity of places and lifeworlds. All the articles, with all their stunning photos, are stored, but to my great regret only accessible to subscribers (it also helps to read French).

They called this incredible collection “Fragments of France”. And that’s exactly what they are : pieces of a rapidly fragmenting society, held together mainly by the nagging feeling that it’s falling apart.