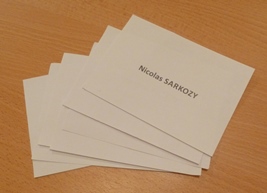 I participated in the primary of the right and the centre on Sunday around lunchtime. It didn’t even hurt. I paid my contribution of 2 Euros, took the 7 ballot papers, and signed, without any conflict of conscience, the ‘Charte de l’alternance’, confirming that I was in favour of political change (which I am), committed to respect the republican values of the centre and the right (which I am) as well as to the ‘redressement de la France’ whatever that means (‘recovery’? ‘improvement’? ‘rebound’? Fine with me, I consider all of these necessary).

It appears I was one of 600,000 participants who do not traditionally belong to the French right, but who seized the opportunity to cast a vote of Sarkozy avoidance, with the hope to have someone else confront Marine Le Pen in what is likely to be the 2nd round of the presidential elections next May. Sarkozy’s intense fishing for votes on the extreme right was going to make him, in comparison to Le Pen, the ‘Pepsi’ offering a weak alternative to the real ‘Coke’. Yesterday morning, France woke up without Sarkozy, who had declared, somewhat pathetically on Sunday night, that he would withdraw from politics. And it didn’t even hurt.

Surprise winner François Fillon will now face former frontrunner Alain Juppé in the runoff next Sunday. While it is doubtful that the support from the left and centre will be enough to enable Juppé to close yesterday’s 15%-gap within one week, pollsters and media would be well advised not to rule out yet another surprise. 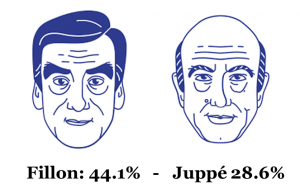 The parties of the right and the centre who organised the primaries deserve unanimous respect. The logistical challenge was remarkable, and it was handled professionally, with all lessons learnt from the calamitous experience exactly four years ago, when the internal election of the president of the UMP (now called Les Républicains) was wrought with fraud and incompetency. In other words: a very well-organised event of active citizenship, which mobilised over 4 million voters. Chapeau!

The seven candidates deserve the same respect. The entire campaign, marked by an unprecedented total of three television debates was an exercise in political discussion where everybody refrained from crossing red lines but actually exchanged about the issues they cared most for. What a welcome change from the mud-slinging of the US elections and the dishonesties of the Brexit referendum. France may be a has-been in many respects, and the constitution of the Fifth Republic, as this blog will not get tired of repeating, is the country’s greatest enemy on its road to renewal, but at least democracy still has a taste of democracy. Ouf!

The only persons involved who were clearly not up to the standards are the TV journalists. During the third debate their complacency and smugness was almost embarrassing and their eagerness to ‘spice up’ a seemingly boring debate was totally out of sync with what the 5 million audience was perfectly happy with over two hours and a half, i.e. a serious, boring exchange on serious, boring issues. The candidates even had to fight for the right to develop their thoughts about the European Union, a topic which the journalists were only too keen of brushing aside in order to focus on more ‘sexy’ issues. Nul!

Yet, even the intense focus on the primaries was interrupted by political rivals, who carefully chose the same week to catch a part of the limelight and grab media attention for some precious minutes. 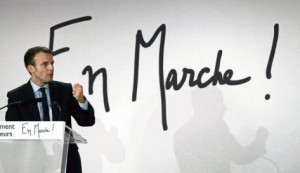 The first one was Emmanuel Macron, the former economy minister and deputy general secretary of the Elysée, who announced his candidacy for the presidential elections on Wednesday. Macron, who had founded his own political movement En marche! after having left the government, chose a training centre in one of the Paris suburbs to make his announcement.

En marche! –which smartly reproduces the initials of its founder’s name – claims to have already over 100,000 followers and refuses to be categorised as ‘left’ or ‘right’, or even ‘centre’. It thus tries to replicate the Gaullist aspiration to become a political movement ‘above’ the party system rather than one party among others. Emmanuel Macron is popular – an Odoxa poll for France info revealed that the 57% of the French who spontaneously considered his candidacy ‘a good thing’ are spread across the entire party spectrum.

Macron should not be underestimated. Should François Fillon win the 2nd round of primaries of the right next Sunday, many moderate voters scared by his austerity and ‘putinophile’ attitude would be tempted to have a closer look at Macron’s programme at the presidential election. What remains perfectly uncertain, though, is how a President Macron, without the backing of a full-fledged political party, would be able to obtain a parliamentary majority in the legislative elections in June/July. 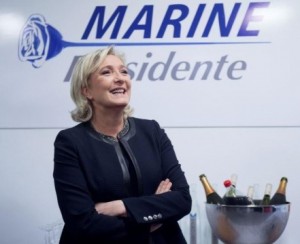 The champagne is already being served.

And then there was Marine Le Pen. Unusually discreet over the last months, she also chose Wednesday (one day before the primaries TV debate) to unveil her brand-new logo for the presidential campaign. What a feast for semiologists! No mention of the Front National at all! No reminder of the FN’s traditional tricolour ‘flame’ emblem, and not even a reference to her family name! Which not only happens to be the same as her father’s – recently excluded from the party – but also as her niece’s, a much more dangerous adversary in the modernisation of the FN. The logo simply says ‘Marine for president’, while the baseline slogan – ‘In the name of the people’ – is, in her words, ‘a code of conduct and a profession of faith’.

The attention focused mainly, however, on the fact that she dared choose a blue rose as new symbol. A rose! The symbol of the Socialists that Mitterrand put at the centre of his famous inauguration march to the Pantheon in 1981. First she took the Socialists’ working-class electorate, then their most-cherished symbol, next will be the presidency. According to her own explanations the rose is meant to be a symbol of femininity, which came upon her as ‘an evidence’.

What a week! Political battle cries and moments of high-flying symbolism on all channels! Fortunately this blog still has some months to go, which should enable it to digest November’s overdose.