French-German commemorations are a reassuring routine, especially on the governmental level. They are the occasion of some shoulder-tapping, large smiles that are not even unsincere, welcome obligations to bask in the sunshine of what has been achieved over all these years rather than in the shadow of the challenges that lie ahead. And contrary to the endless cycle of war-related anniversaries – terrifying battles and atrocious crimes, aggressive invasions and humilitating occupations – commemorating 60 years of a friendship Treaty comes as a relief, a rather enjoyable occasion to socialise.

Over the decades, celebrating the Elysée Treaty has become a ritual of both taking stock and expressing concerns over worrying trends of divergence between French and German politics, especially with regard to their role and influence in the European integration process. The latter has been described as declining for as long as I can remember. With always the same metaphors: it’s either the ‘engine’ that stutters, or the ‘couple‘ heading for divorce.

Europe, and geopolitics, being complicated, there are of course always challenges that strain the French-German relationships. How could they not? This is a permanent clash of two very different, historically path-dependent political cultures, governance structures, and philosophical heritages. Doing things together, finding common ground on existential questions, requires considerable effort from both of them. And some moments in time are more stressful, more demanding than others.

Thirty years ago: a critical moment

In January 1993 – at half-time of the currently celebrated 60 years of partnership – the moment was particularly rough. It was the first really big bilateral post-reunification event, and it had been preceded by some nasty developments. Germany had rediscovered economic frailty and a surge of xenophobic crimes that revealed the existence of a worrying extremist fringe. And over most of 1992 France had gone through a referendum campaign for the ratification of the Maastricht Treaty that had been marked by some very shrill Anti-German overtones in the speeches of leading politicians.

No wonder the media were much concerned. Le Monde covered the event to a large extent, mobilizing its finest experts, like Henri de Bresson or Daniel Vernet. The latter saw simultaneously ‘a battered French-German couple’ and an ‘island of stability’ in an increasingly destabilized environment, marked by both the disappearance of the Soviet Union and the resurgence of ethno-nationalism in its wake. Anyway, he concluded, there was ‘no alternative to French-German cooperation’.

Le Figaro, which at the time was a serious newspaper, diagnosed the need for the ‘restart of an exhausted engine’ that had lost a lot of steam during the painful negotiations on the future monetary union. The different researchers mobilized by the paper were more sanguine, demonstrating trust in the inertia of institutional bonds: sure, French-German relations were entering ‘a period of doubt’ but were also marked by ‘advanced interdependence’, which would continue to produce pragmatic initiatives.

In Germany, there was recognition that over the thirty years since de Gaulle and Adenauer, the political leadership in both countries had been up to the historical task. But, as Jürgen Wahl wrote for Die Zeit, there were also regular signs of ‘marital crisis’.

At this critical moment of uncertainty, public opinion, just like in the post-war years preceding the Elysée Treaty, already seemed one step further than the professional observers:  according to an IFOP survey on mutual perceptions, only 11% of the French were left with a ‘bad opinion’ about Germany, while two thirds of the Germans declared having a ‘good opinion’ about their French neighbours (with another third, including most likely many East Germans, opting for ‘neither good nor bad’). Reconciliation was considered ‘irreversible’ or at least ‘solid’ by 60% and 71% respectively. Over half of the respondents in both countries declared the other to be their ‘most reliable ally’, significantly above the US or the UK. And 89%, in both countries, esteemed ‘necessary to further strengthen cooperation’ between the two countries. I have doubts Adenauer and de Gaulle would have expected such an overwhelmingly positive trend in their wildest dreams (not that they were known to be dreamers anyway).

Luckily, life is not exclusively made up of grave and far-reaching historical milestones. Even in January 1993, people had other preoccupations, among which, obviously, football. 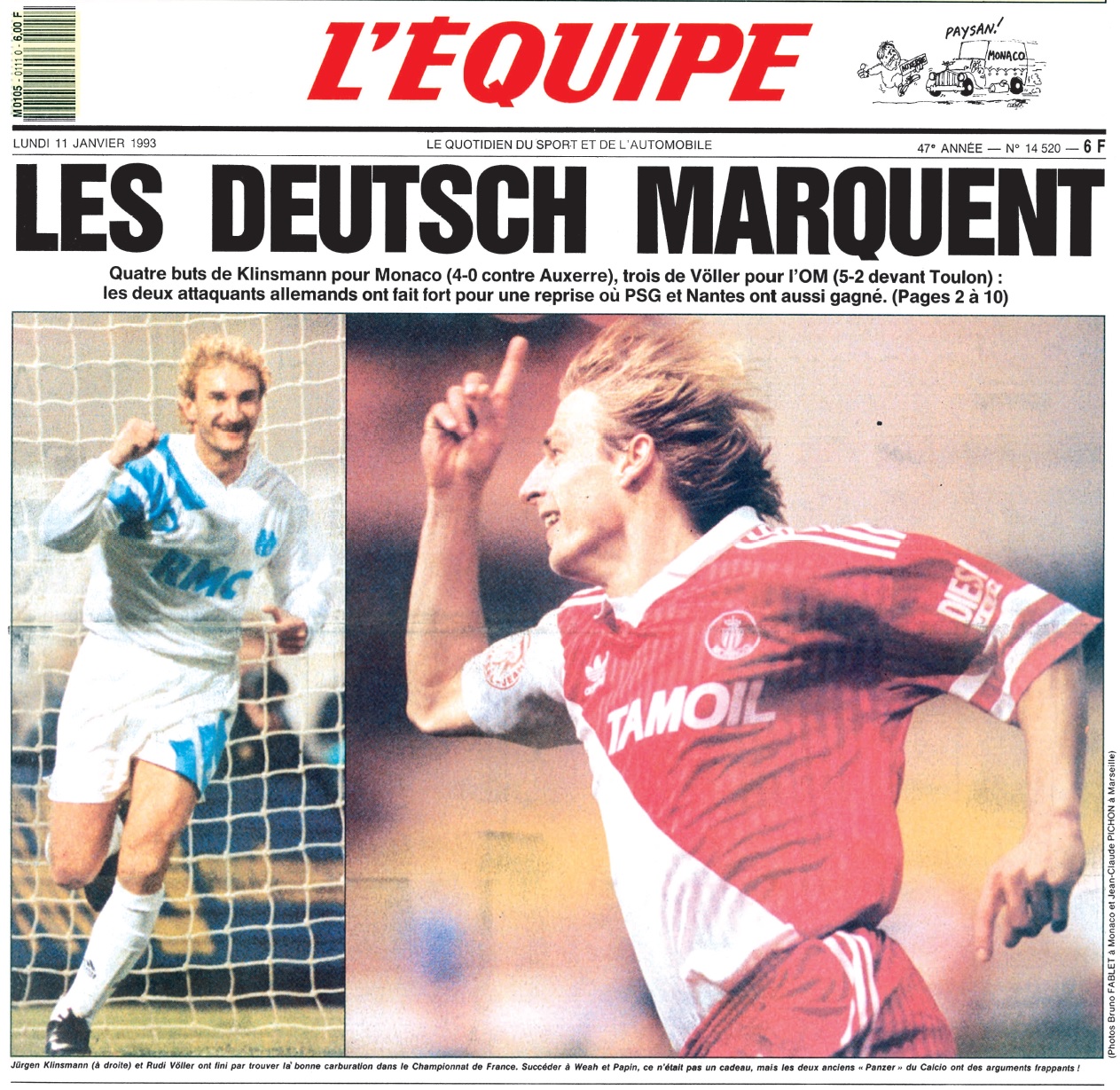 Always prone to indulge in a nice pun, the Monday morning headline of L‘Equipe – the number one selling daily newspaper in France, way above Le Monde or Le Figaro – on 11 January read « Les Deutsch marquent ». Playing with the homophony of the verb marquer (in football: ‘to score’) in its conjugated form and the German currency, the title referred to the total of seven goals scored over the weekend by the two German world champion strikers Rudi Völler et Jürgen Klinsmann, playing for Olympique Marseille and AS Monaco respectively.

What a lovely way to take the hot air out of the hysterical debate about the Bundesbank’s alleged tyranny! And a tongue-in-cheek reference to the introduction of the single market ten days earlier, with its promise of free movement of people. Only two years before Jean-Marc Bosman took European football to court and launched a revolution.

Three decades later, the Euro is already over twenty years old. My current students have never known the big bad Deutsche Mark. Would they still get the point of the L’Equipe headline?

The 60th anniversary of the Elysée Treaty, despite all the current dark clouds hanging over Europe, could be a good moment to innovate in terms of metaphor. Rather than take the eternal ‘engine’ or ‘couple’ out of the drawer, it’s an opportunity to turn to football, one of the best providers of metaphors and allegories I can recommend to journalists. Why not compare France and Germany as two particularly indispensable players, without whom there’s no chance of winning, but who in turn would be nothing without the team? Feel free to develop the semantic field further, from the obvious allusions to ‘defence’ and ‘attack’ to more sophisticated skills like ‘counter-pressing’ and ‘give-and-go passing’.

More articles from the blog

The first and so far only international football match between France and Algeria took place twenty years ago, on 6 October 2001. The starting point had been the sustained euphoria around the multiethnic character of Les Bleus, the French national team, winners of the 1998 World Cup and 2000 European Championship, and their emblematic leader […]

French election campaigns are usually desperately navel-gazing. Foreign policy issues are all but absent from the debate. And even in ‘ordinary’ times, all mainstream evening news programmes consider international news a toxic audience killer. But the war in Ukraine has swept everything else in the background and changed the campaign dynamic. It has also put […]

There is no doubt that French politics have been ever strongly tilting to the right for months now. It’s not even exaggerated to claim that the political discourse is dominated, if not polluted, by far-right vocabulary and semantics. Want to study first-hand the mechanisms of the Overton window? This is the place. Paradoxically, at the […]

In France, the presidential election monopolises all the attention. Of candidates and non-candidates, activists and voters, media and pollsters, domestic and foreign observers. That’s understandable. The playbook is irresistible: rhetorically overblown visions of society collide in a dramaturgy replete with plot twists and cliffhangers, the absence of any post-election compromise allows for a merciless showdown, […]

How fitting: this spring, ARTE, the brainy French-German TV channel, will broadcast a second season of ‘En thérapie’, the French version of ‘In Treatment’ (itself based on the Israeli TV hit “Be Tipul”). 35 new episodes of people on the psychiatrist’s couch, composing what Le Monde called ‘an immobile travel across French society in the […]