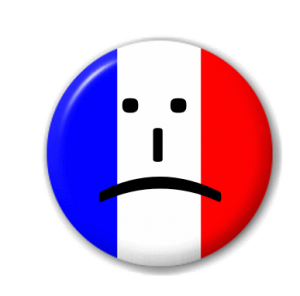 Come January, social pressure runs higher than ever in France. If you do not wish a smashing ‘Bonne année!’ to absolutely anybody you may come across during the entire month, you’re a social outcast.

The Elysée is of course not exempt from this pressure: one of the most bizarre rituals of the French Republican Monarchy is the month-long litany of New Year’s wishes which the President addresses in the most solemn manner, at official receptions all over January, to a large variety of very specific groups and corporations: from the corps diplomatique to religious authorities and trade unions, and, most importantly, the Boulangers-Pâtissiers (no joke). A perfectly redundant series of top-down appearances in pompous settings, disguised as important state-of-the-union moments. As usual in French Republican culture, such traditions are half-ridiculous, half-endearing.

In 2017 the President’s most official wishes for a happy new year may be more pertinent than ever, since pessimism, this old ‘endemic disease of our country’ as historian Michel Winock put it already in 1995 in his book Parlez-moi de la France, is rife in all parts of society (including the Boulangers-Pâtissiers). A recent report with the title ‘Fault Lines’ issued by France Stratégie (which in the glorious times when Jean Monnet headed it was called the Commissariat Général du Plan) reveals just how much a pessimistic view of the country’s present state and prospects is ingrained in the French mindset.

According to the main author, Jean Pisani-Ferry (the former director of the Brussels-based Bruegel think-tank), the report provides a portrait of ‘a worried, distrustful, and split society’ in urgent need of ‘reunification’. As he concludes, rather stunned, from the survey data, ‘the French cast on themselves and excessively dark gaze, and they are exceptionally pessimistic for the future’. This is all the more paradoxical as the French perception is often in contrast with the objective figures, especially in comparison with other European states. This is the case on issues like poverty or social mobility, for instance, but also on integration: while 72% of the French consider that the integration of immigrants ‘functions poorly’ (twice as many as ten years ago), 89% of the children born from two migrant parents declare they ‘feel French’.

The French collective gloom is corroborated by other surveys, like the recent YouGov Poll on perceptions of globalisation in 20 different countries, where the French very clearly stood out with declarations like ‘Globalisation is a force for bad in the world’ (no. 1 with 37% of respondents), ‘immigrants have a negative effect on the country’ (no. 1 with 45%), ‘the world has gone worse in the past 12 months’ (no. 1 with 74%). The only answer on which they rated lowest was ‘my country is the best country in the world’ (5%).

The same can be said about the recent survey published by the Bertelsmann foundation, where only the Austrians are as negative as the French about the cultural ‘threat’ that globalisation represents (55% and 54% respectively), while no other European country matches the economic globalisation anxiety of France (51%).

There have been a lot of hypotheses about the deep causes of this pessimism, which feeds of course the oft-quoted ‘declinism’, but should not be confused with it. Some claim the French feel deeply nostalgic for the loss of their empire and/or their cultural hegemony, but after a quarter century in this country, this sounds absurd to me and might well be an English extrapolation of own feelings on others. Some simply say, not entirely without reason, that the French have more quality of life to lose than others, which explains their conviction that things can only go down the train (‘tout fout le camp!’). Others blame, also with some justification, the French school system, which seems designed to make people unhappy for life, or a deep-rooted cultural tradition of being ‘glad to be unhappy’.

But French collective pessimism probably runs deeper than just nostalgia or anticipated regret for what is too good to last. Claudia Senik, author of a (very good) book on the economics of happiness, considers it is due to a set of basic values acquired relatively early in the socialisation process. I agree with her: to me French pessimism seems deeply anchored in an unusually high collective sensitivity to the unbearable discrepancy between the normative ideals of their republican democracy and what society and politics deliver in real life. Maybe the French have simply preserved the capacity to be unhappy with how global capitalism triumphant interprets Liberté, laughs at Egalité, and strangulates Fraternité. Unhappy with how their own country proves, year after year, its helplessness when it comes to counterbalance these trends.

This is not nostalgia, but a profound distress about the way things are, with modernity’s false promises, with the fundamental unfairness of ‘la condition humaine’. France is to the world what Ken Loach has been to Britain over the last fifty years: a reminder that you have the right to believe in a fairer, gentler society.

Clearly, pragmatism is not the French people’s most striking characteristic. But if being pragmatic means you arrange your worldview and deeply held convictions with what real life has to offer, I cannot help but find a certain appeal in the hopelessly naïve, stubbornly critical, way the French find the world wanting. If that’s all there is, they seem to say, we could have spared the effort to spread our revolutionary ideals in the first place.

This being said, hope, as we know, springs of course eternal. Maybe that’s why the French are so obsessed with wishing a ‘Bonne Année!’ to absolutely everyone they meet.