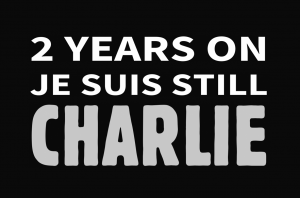 Already two years since the Charlie Hebdo shootings, which in hindsight look like a prelude to a series the end of which does not seem to be in sight.

Is Europe still Charlie? Many Europeans, the large majority of whom had never heard of this magazine before, still claim they are, and there is no reason to question their sincerity in defending freedom of speech. What is striking, however, is the extent to which Charlie Hebdo was, and is, an utterly French interpretation of this apparently universal freedom.

Thirty years ago I was myself hopelessly lost in French satire. To start with, I was overwhelmed by the sheer quantity of satirical weeklies and monthlies that were on sale. Okay, I knew the Canard Enchaîné (which just turned a hundred years old – congratulations!) from school and was aware that France owed the ‘duck’ the uncovering of countless scandals and the invention of sarcastic puns by the dozen each Wednesday. No ads, no colours, old-fashioned layout, and always up to the beak in the spheres of power.

But there was more: a whole load of magazines that seemed to be rooted in a very particular comic-strip tradition, such as Fluide glacial, L’Echo des Savanes, and of course Charlie Hebdo. On television there was the Bébête-Show, followed by the hilarious Guignols de l’Info, brilliant in their first ten or fifteen years and so much funnier than Spitting Image (let alone their hopelessly boring German counterparts).

The greatest cultural shock, however, was the tone of it all: violently impertinent, furiously leftist, ruthlessly acid, and unbelievably tasteless. And this anger behind the humour! Charlie Hebdo was permanently outraged. Against racism and antisemitism, violations of human rights and militarism, pollution and bull-fighting, capitalism, and, of course, its most despicable opium: football. They hit out at the powerful, but also revealed, like Molière had done before, our own egoism and spineless laziness.

Sometimes their zeal in attacking dogma of all sorts turned against them and made them utterly dogmatic themselves. But the sheer radicalism with which the non-negotiable principle of ‘liberté d’expression’ was defended still forced respect. And in their best moments, their mix of bitter, black humour and stupid joking on teenager-level was refreshing.

If they had limited their anger to football, capitalism in general and French politics in particular, the murdered cartoonists would no doubt still be happily drawing caricatures in their office. But they were also the heirs of an aggressive, impudent and radical anti-clericalism, dealing sweeping blows against all kinds of religion, without any taboo whatsoever. Their coarseness made me wonder years ago to what extent this was transferable into other cultural areas.

In France, it functioned. Even Sarkozy, when he was still minister of the interior, defended them, declaring ‘I prefer an excess of caricature to an excess of censorship’. Such preferences, however, are directly linked to the normative, path-dependent and foundations of a given society. They have been negotiated and consolidated over long periods of time, within the legal and linguistic framework of the nation-state.

Three epochs of French history have been of particular impact with regard to satire, caricature, and the freedom of speech.

Concerning religion, the French enlightenment movement of the 18th century was significantly more radical than in other countries. For Voltaire and Diderot the fight against obscurantism and religious dogma in all its forms was no doubt the major challenge of the century and they could see no reason why religious susceptibilities should be subject to a special treatment. As early as 1791 the French Revolution abolished ‘blasphemy’ as an offence. In Germany it still exists today.

The second key epoch is the fight for the strict separation between the State and the Church at the beginning of the 20th century. The French type of secularism, always referred to with the untranslatable term ‘laïcité’, is a complex and demanding concept. Understanding and implementing it requires a minimum of intellectual effort by the citizen. In theory it is probably the best possible way harmonious coexistence of all confessions, including agnostics and atheists. In practice friction with the claim to absoluteness inherent to several religions is inevitable and painful. Only a few days before the Charlie Hebdo shooting there was a vivid public debate about the question whether state buildings like a Préfecture should be allowed to set up a nativity scene for Christmas in their hall. Would this just be some cultural heritage (to be tolerated) or a religious symbol (to be banned)? The discussion went on forever. Last summer, there was the ‘burkini’ drama. Swimsuit or religious symbol? The next headscarf scandal is already programmed.

The third key epoch for understanding French satire is the revolt of May 1968. One of the issues the French youth revolted against was the state censorship still practiced under de Gaulle and his ‘information minister’. The explosion of total freedom of expression in the early seventies wiped away all taboos. This is the time when all these ruthless satirical magazines were created and found a public eager to transgress the old red lines. It is not surprising that three of the great cartoonists killed in the January 2015 shootings were already in their seventies (even though their humour was sometimes more of the adolescent type…)

Three periods that are very specific to France and that have provided a wealth of codes and references that are only understandable within the French context. Which explains why behind the countless ‘Je suis Charlie’ signs of two years ago there were many non-French voices who expressed, to say the least, a certain bewilderedness after having taken a closer look on the magazine. Are there no limits to satire? Had these cartoonists not ‘gone too far’?

They need not worry. In 2017 Charlie Hebdo is not exactly toothless, but it has inevitably become much more selective in its anti-clericalism, preferring to hit out at religions, like the Catholic Church, who have grown accustomed to the existence of aggressive satire…

Some weeks ago, Charlie Hebdo has started publishing a German edition, based on the assumption that the massive solidarity and empathy shown by the German public two years ago suggests there is a demand for the Charlie kind of satire. I think they are wrong. My guess is that the German edition will be short-lived, and even if it survives its first year, it will hardly reach the target of 200,000 copies sold. Simply too French.